Sitting in one of the rooms at the Queens Museum in Flushing Meadows-Corona Park is a finely crafted ‘ride flat’ wooden crate. It is longer and wider than it is tall, raised on black plastic milk crates turned upside-down, supporting the weight of the wooden crate; the milk crates are from Clover Farm Dairy based in Reading, PA. The shipping crate is typical, constructed with plywood and trimmed with pine, which has been nicely routed to give it edges a soft round appeal. Even the trim of the pine is well done, and brings to your attention: HANDLE WITH CARE. There are handles, but you’re not inclined to grab them; they blend in with the other black-on-pine cautions. You can, however, touch the crate, as you’ll need to squat down to see what is going on inside. Light is emanating from small barred windows adorning the lateral sides of the crate. For example, here’s someone peering inside: 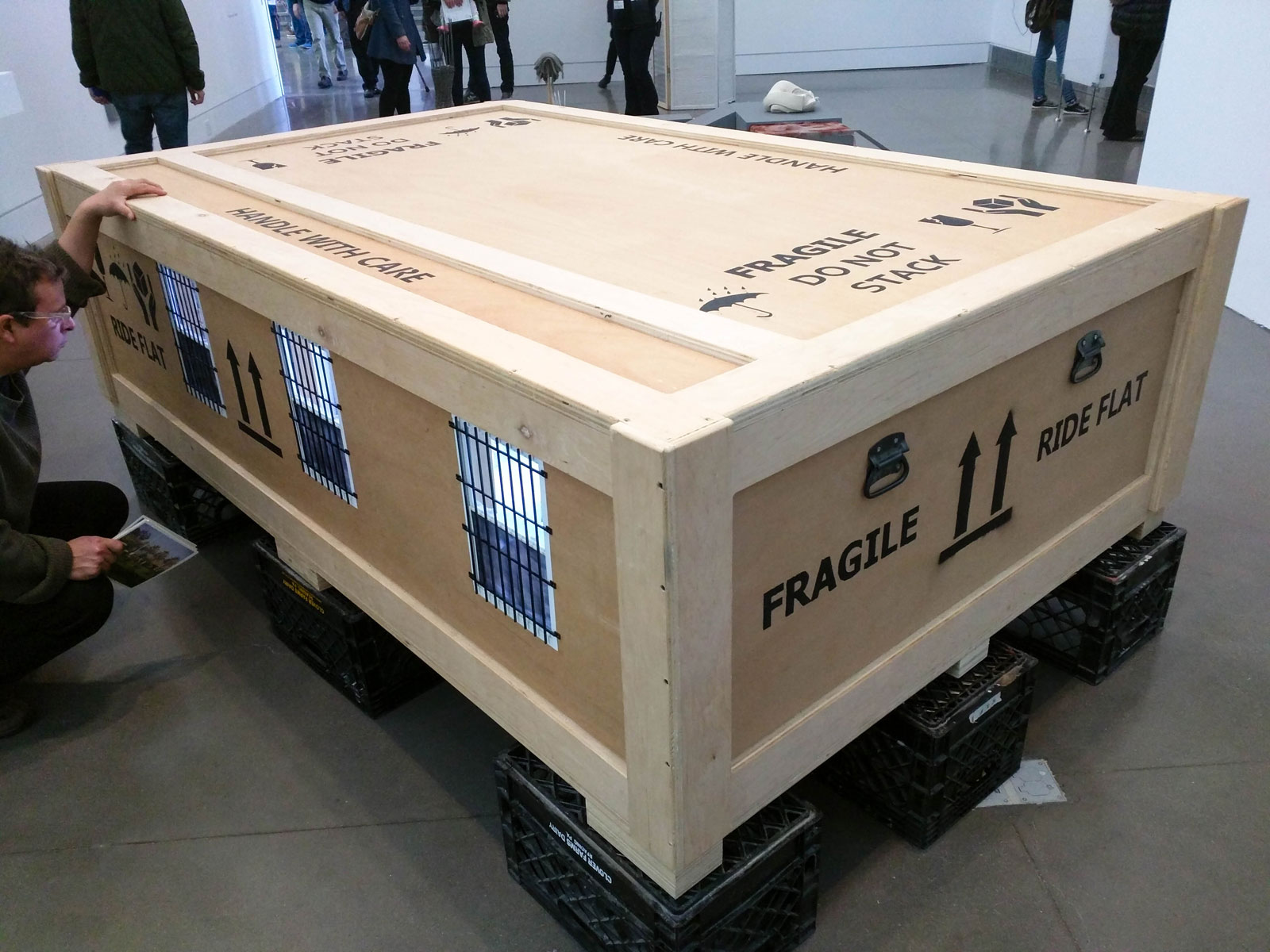 One corner of the crate is marked with a black paint pyramid to indicate this is where the crate’s lid is fitted to the body of the crate. Insert here. And near the marker is a smaller window, and a door: 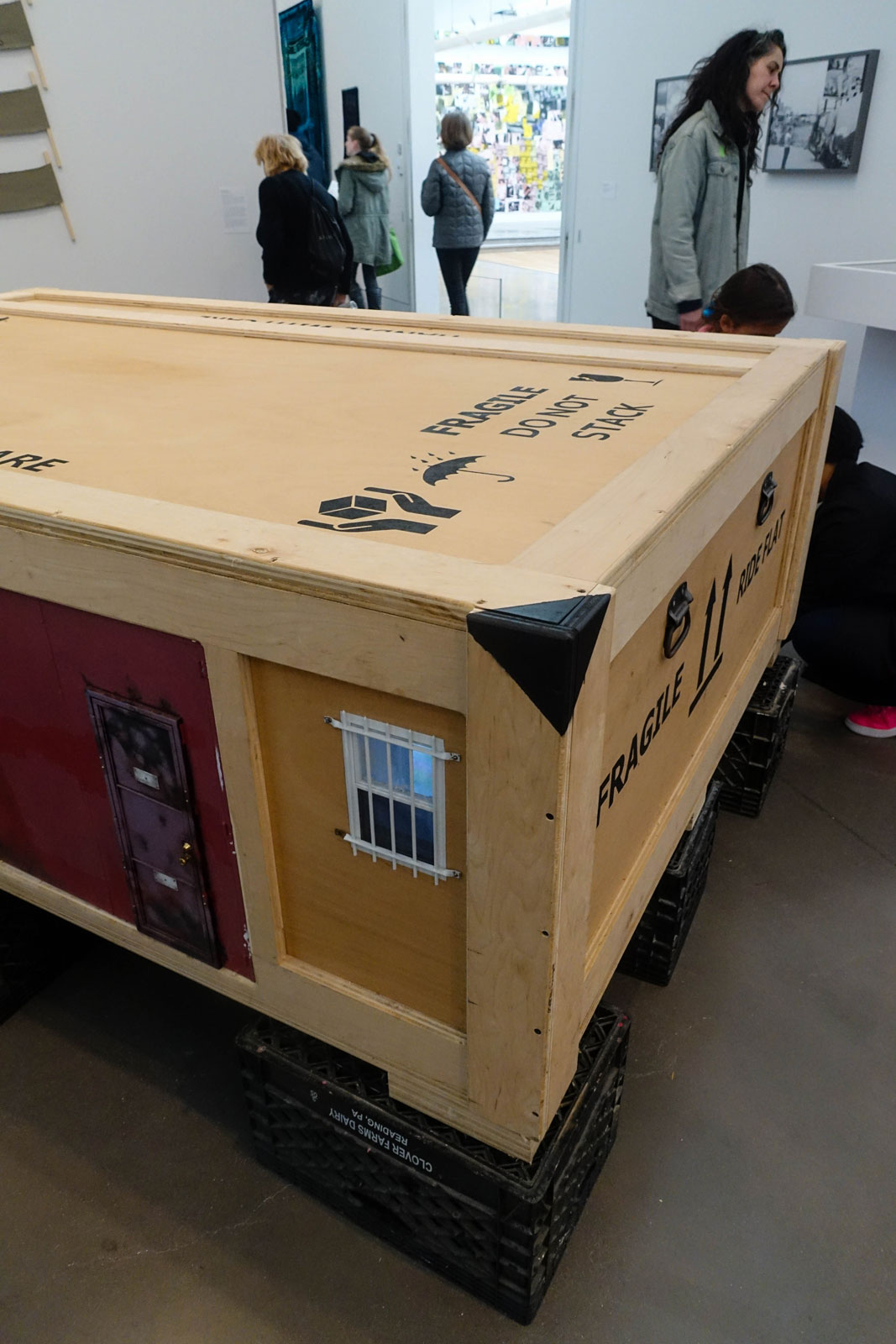 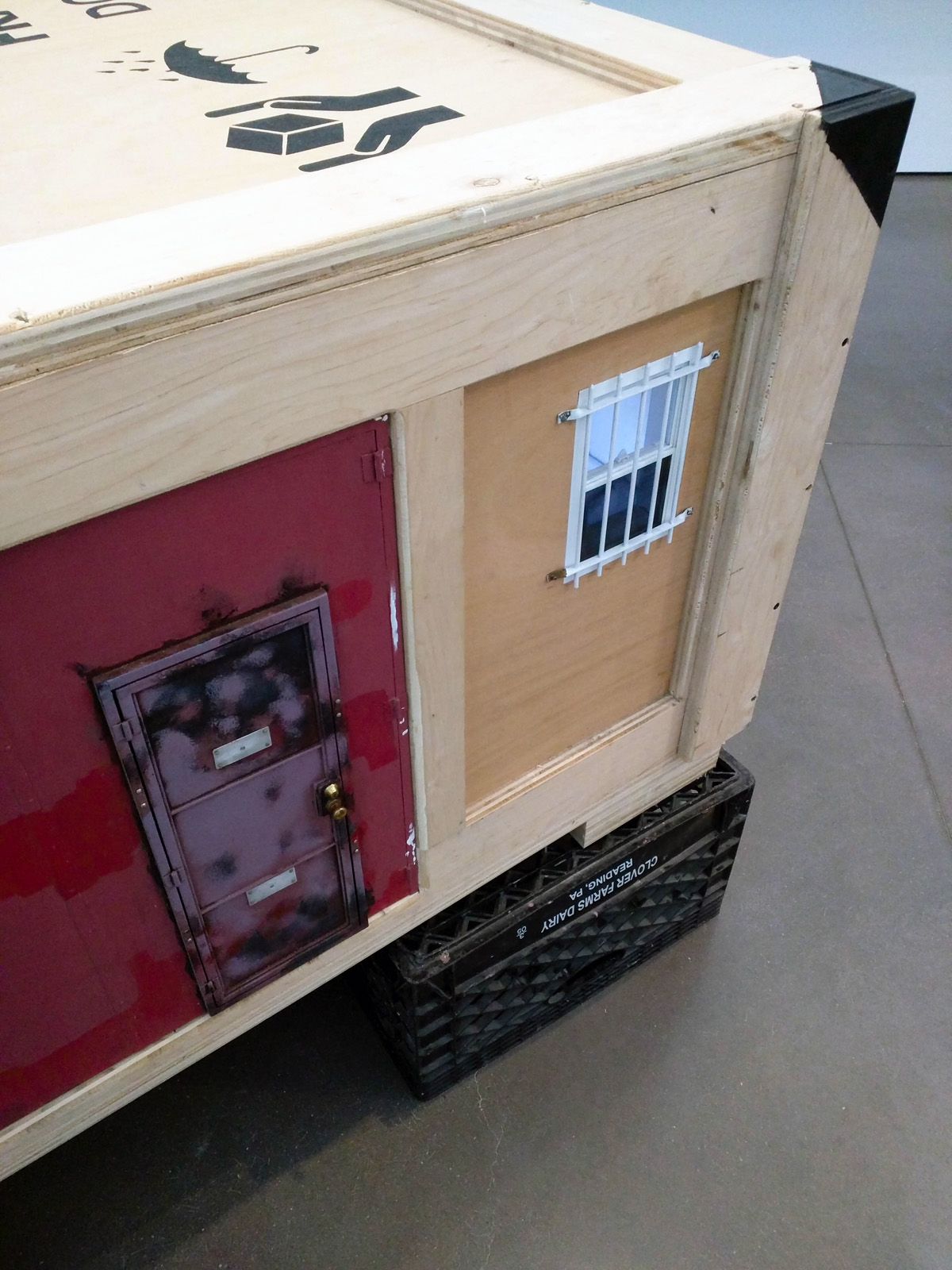 Even having worked with miniatures before I was unprepared for what lay inside, a complete replica of the studio of the artist, Brian Caverly. 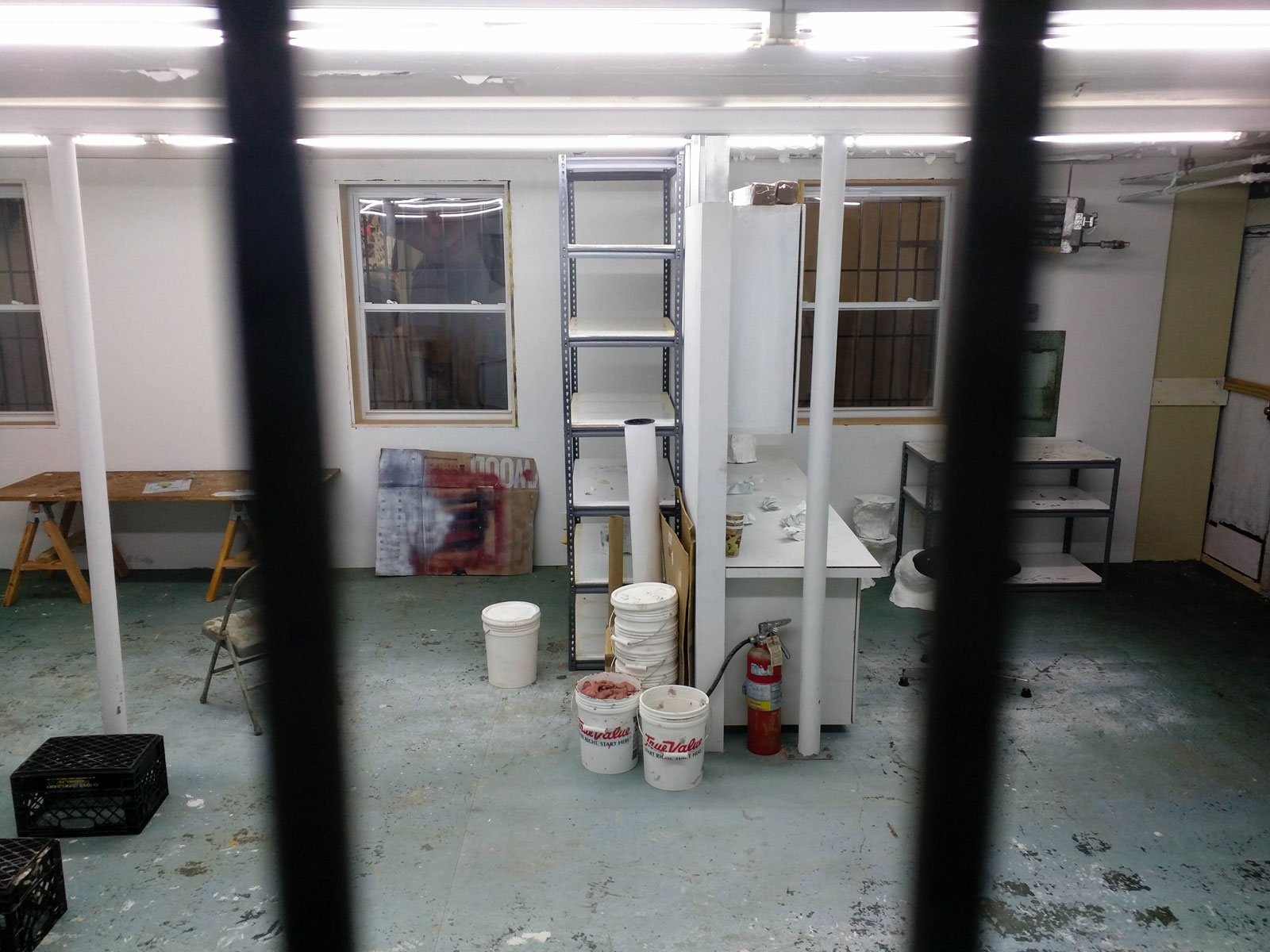 Industrial elements of the building, such as pipes and space heaters, along with working fluorescent electrical lights, are recreated. Safety instruments like the fire extinguisher have miniaturized labels. Buckets that were filled with slop are stacked on top each other, some need a finer cleaning than others. And even the cord of a Rigid – what I call R2D2s in ‘shops – vacuum cleaner is resting on the floor, complete with the self-knot those cords always seem to have. 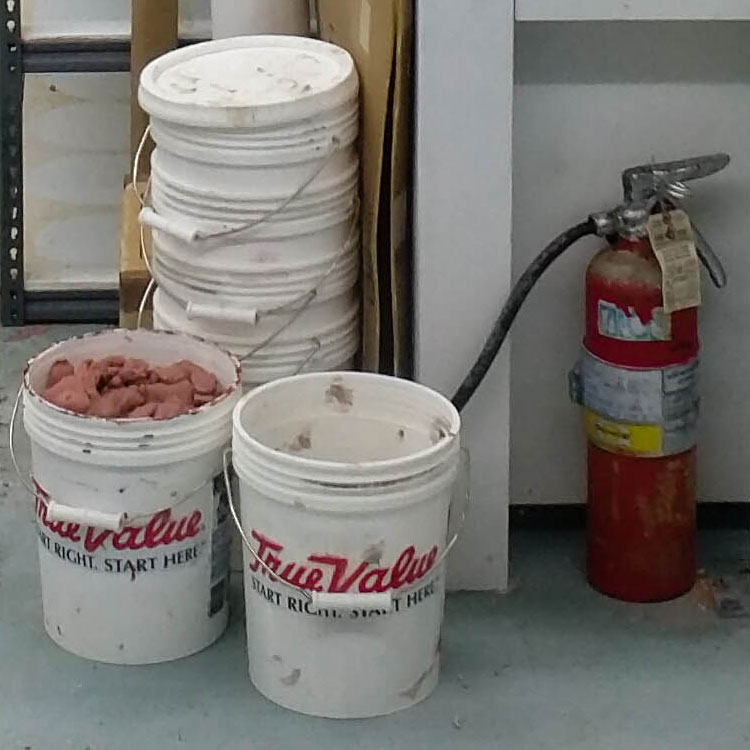 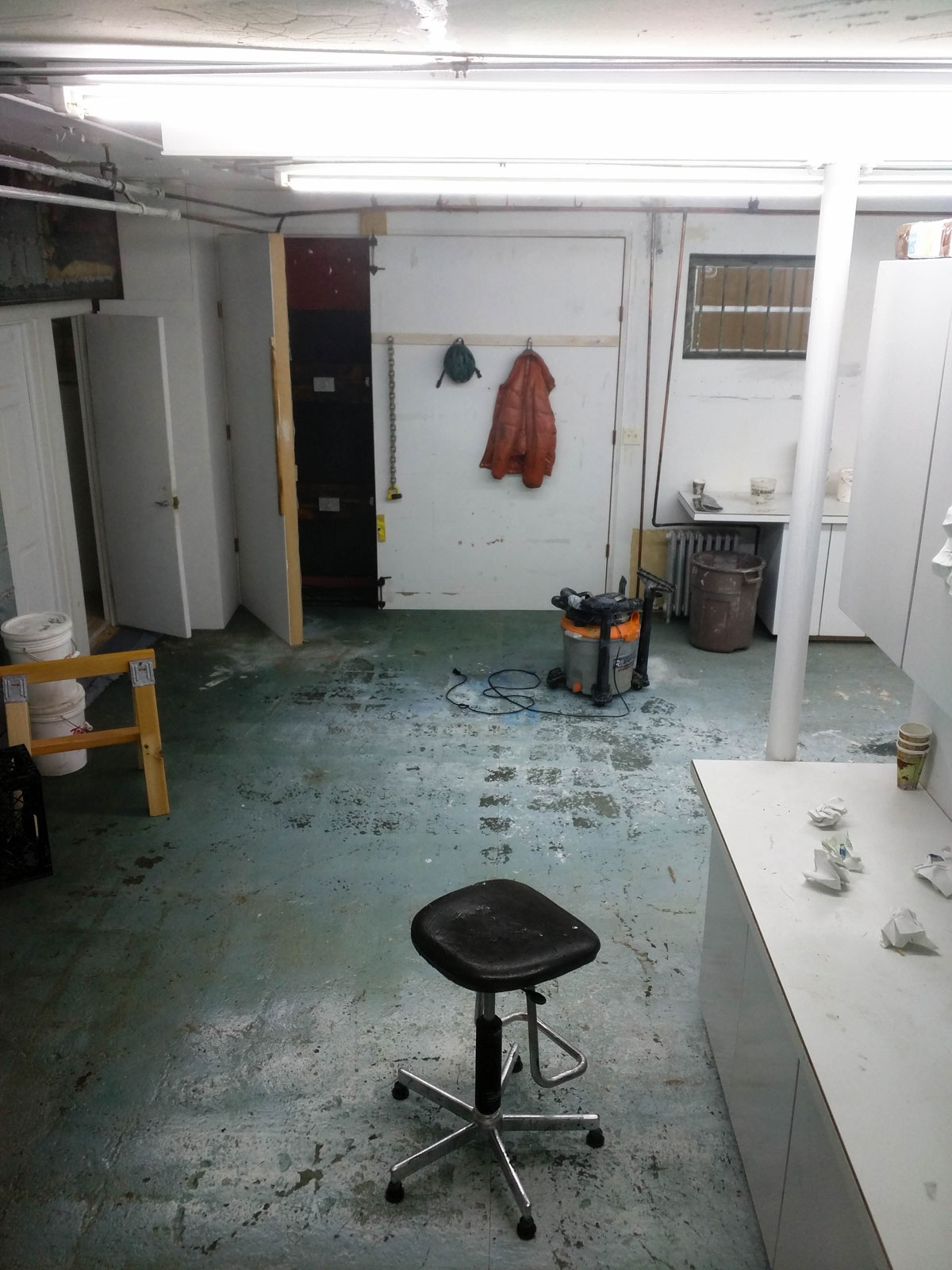 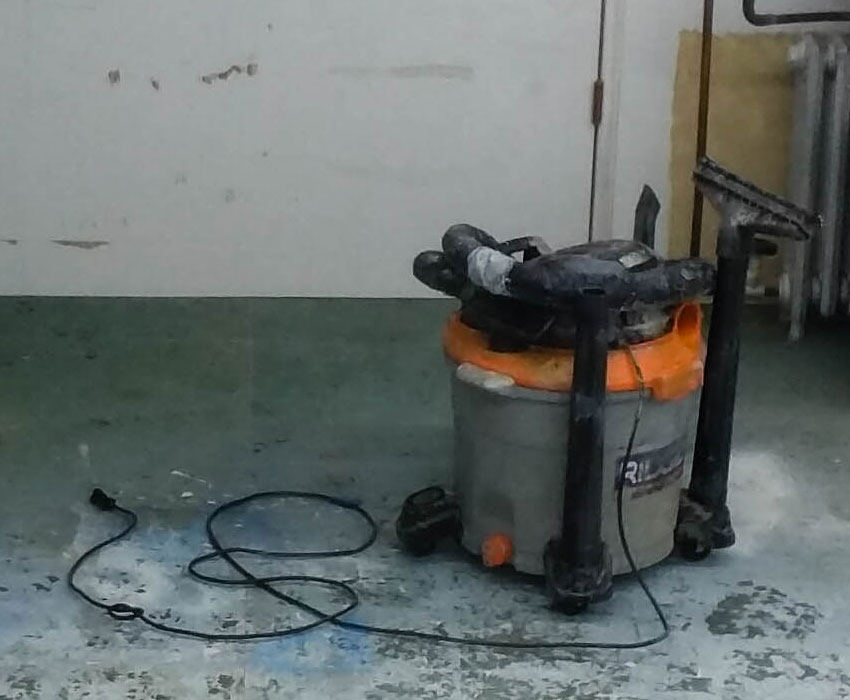 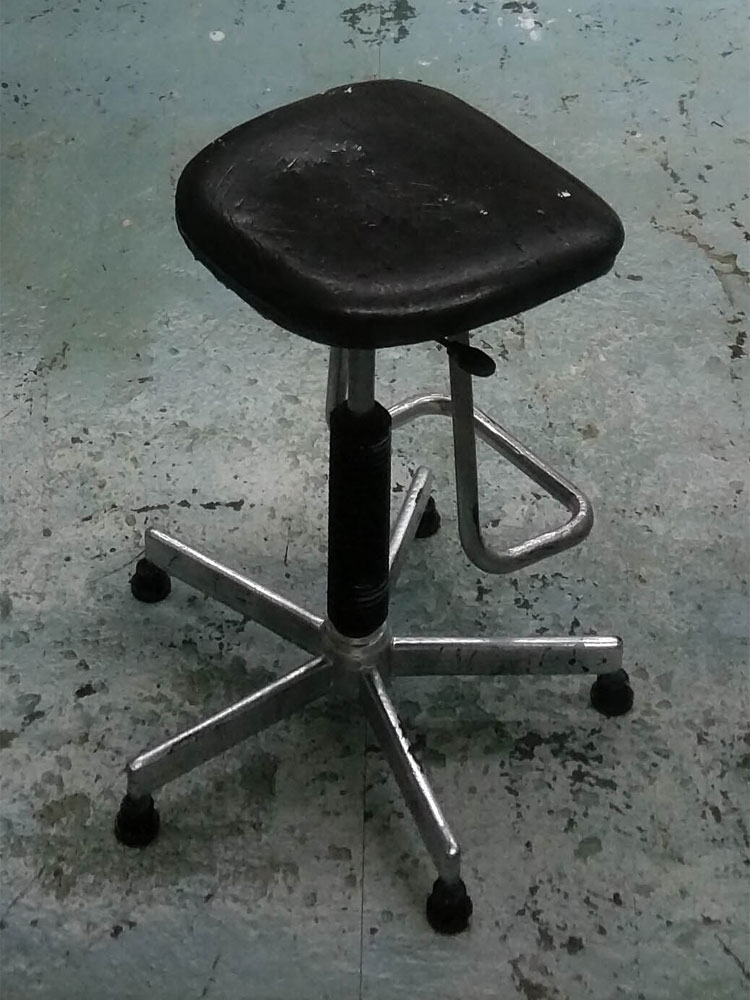 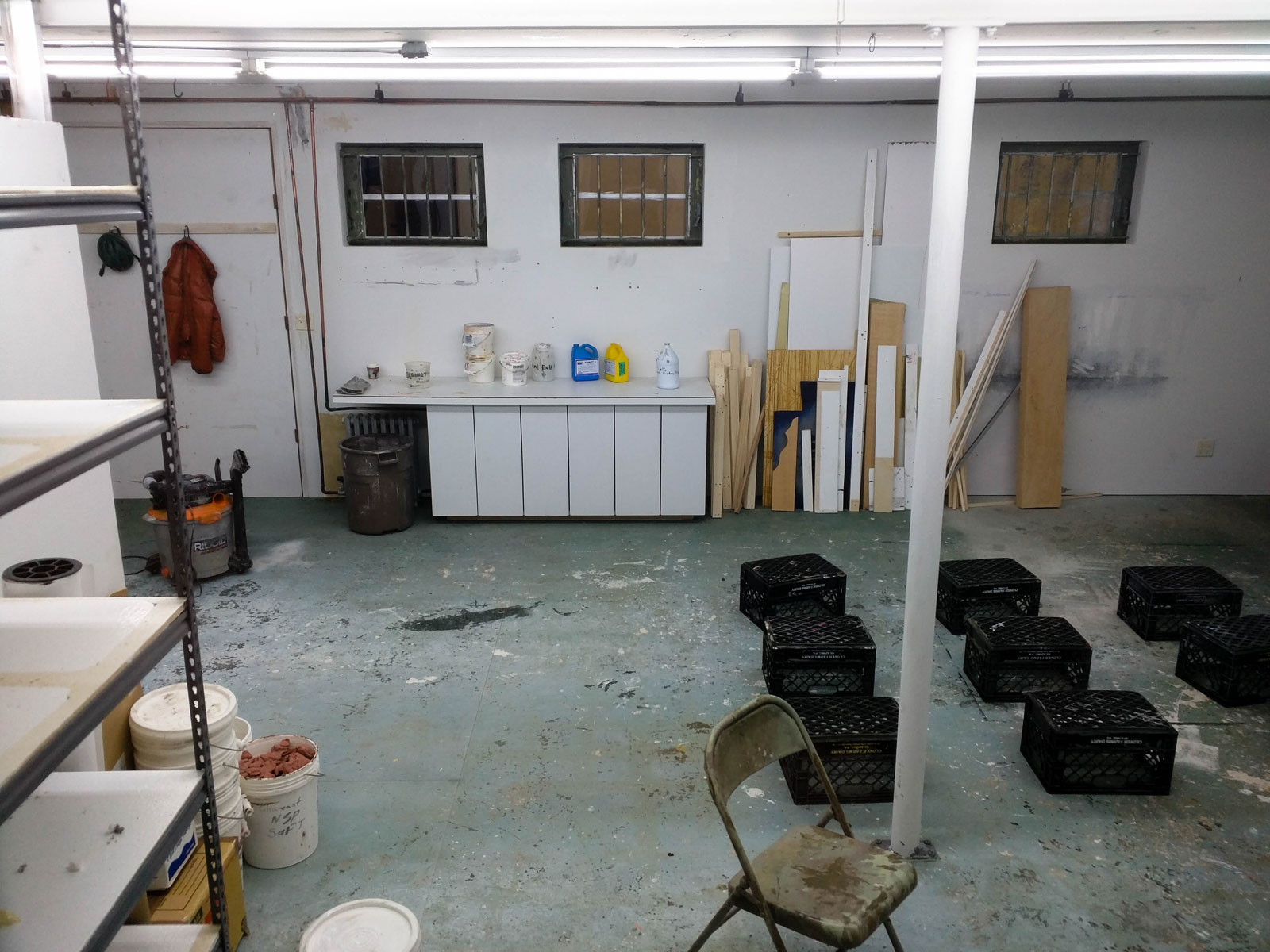 The label on the wall – I only ever look at labels after inspecting artwork – says the piece is titled ‘Studio Abandon,’ and it was made over a 6-year period from 2011-2016. I thought, “Anyone who has ever needed a creative space will surely ‘get’ this work.” Sure enough, the label reads,

“With its interior instantly familiar to artists and people who work with them, the sculpture brings to mind Queens’ growing appeal to artists on the hunt for affordable studio space as rent skyrockets in other boroughs. In just a few years, rapid development in the region might make a space like this a thing of the past in New York City.”

Without getting into the very complex issue of the gentrification of industrial spaces – or even playgrounds – I found this amusing. For several reasons. On the creative side, it could be argued this work wouldn’t exist without said gentrification; what is the artist trying to say, otherwise? Another read is that the rent in Queens is somehow ‘affordable’ compared with “other boroughs” – but by Queens they mean more specifically Quooklyn. The point there is it’s all relative; there’s cheap rent in Flushing, but you probably don’t want to live ‘there.’ There’s even affordable spaces in LIC, but that’s not on the L train, so why go there? (And no not every sector of LIC is near the two G train stops in Queens, so you can’t crosstown to the anointed city so easily.) When the entire creative impulse of a city’s young (read: 25-40) artist population is focused around a single neighborhood or even subway line, it’s bound to collapse in the long-run due to un-invested terms & conditions of those same people (I’m one of them!) over time. You need to invest yourself in the social fabric and political process of any city, borough, neighborhood, street. A creative society requires more than just ‘cheap industrial spaces’ within which to make art. … Don’t get me wrong the sculpture is amazing – but the wall label misses the mark a bit (I know Queens Museum have the best intentions, of course – I said ‘without getting into the very complex issue’ and yet it’s a slippery slope, point proven).

Back to the work!

I’ve taken on 2 or 3-month miniature builds, so I can only imagine the work that went into this over multiple years, all the while making other work and installations no doubt.

Which leads to real crux of the work, which is where is the art? That’s the issue here, poking at your subconscious. There’s sort of a cardboard thing leaning against one of the walls, but it appears more like a spray zone than any Basquiat-esque painting; there are pieces of paper crumbled on a counter, but I don’t think those are origami works or conceptual ‘rejected letters’ from failed proposals. The shelves are empty. There are raw materials but nothing even in progress.

And that’s when you realize, artist, someone is watching your every move: 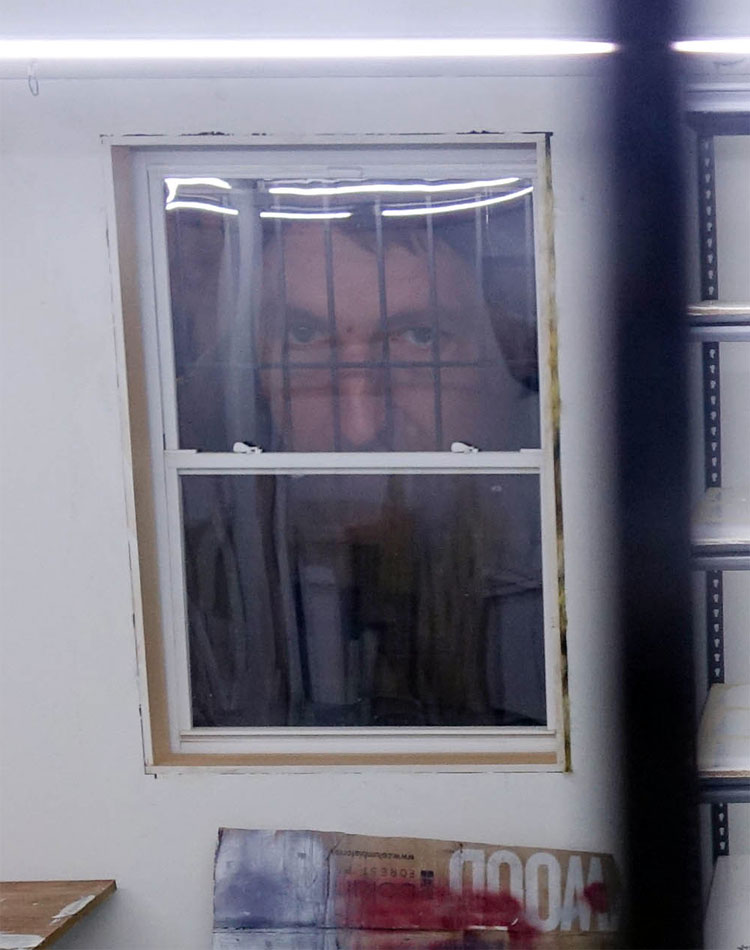