the end of another digi-era: Goodbye Picasa

When Google announced the shuttering (see what I did there?) of Picasa in mid-February it was a shock to no one and a surprise to everyone who still uses the software, especially desktop app users. But the sting for me was two-pronged. Or three…OK possibly ten or twelve.

For starters you didn’t need to look any further than their own blogspot service to realize how little they cared about their own products (and by extension, users): they hadn’t updated “The Official Google Picasa Blog” in over 4 years, the previous blog post before February 12th’s cancellation announcement being dated December 8th of 2011.

One can’t help but wonder if there even was a “Picasa team at Google” anymore.

The cancellation blog opens with the following line:

After much thought and consideration, we’ve decided to retire Picasa over the coming months in order to focus entirely on a single photo service in Google Photos.

Now here’s my first prong: Picasa is a brand item, whereas Google Photos is just two words adjacent. I mean I get it, time moves on. But Picasa was a well-recognized thing as the only thing that did its thing with its name. Google Photos is like being hand-slapped to have to pronounce ‘Google’ in front of everything from Maps to Reader (oh wait nevermind) to … Photos. People will just start saying ‘the photos app’ – they won’t bother saying ‘the Google Photos app.’ And the word “photos” is already generic, for anything photographic (nevermind that not all images are photographs); whereas Picasa as a name brand is all-inclusive for all image types, regardless of their photographic – or not – origin. It’s a terrible choice. And the icon sucks; the Google Photos pinwheel is not nearly as inventive or brand-creative as the Picasa shutter-circle. Oh well, what do we know.

And you think, OK well the desktop app software should still run, as it should, independent of their “team.” After all it’s basically been the same software for a few years now. And they say this, which reads pretty agnostic:

As of March 15, 2016, we will no longer be supporting the Picasa desktop application. For those who have already downloaded this—or choose to do so before this date—it will continue to work as it does today, but we will not be developing it further, and there will be no future updates.

In other words, if you already have the binary executable, it should keep running – because that’s local software on your local machine. They won’t be updating it, but – and here’s the hard lesson assumption – backwards compatibility should be maintained. And therein lies prongs 2, 3, and 4-9. Not long after their cancellation blog suddenly features within Picasa’s desktop app started to become bugs: notably, the maps pane has begun to cease working with multiple users (including myself) reporting the marker doesn’t drag, the map scrolls on its own, and some map panels are outright not loading. There are several threads on Google Product Forums about it: here and here. Such a shame. Some people (also like myself) have ~12 years of metadata stored in Picasa and a specific workflow reliant not on updates, but simply on something working as designed.

Then Google went a broke that in the name of SaaS.

And the writing on the wall is clear: if not today, or tomorrow, eventually the software simply won’t work at all. Some feature will become broken, indefinitely. So an exit strategy is now a must.

Shockingly, other services aren’t as numerous as one would think. I mean everyone takes images these days, and yet there are fewer image processing and cataloging softwares than ever before. Even Apple, the supposed champions of only ‘designing’ products/services that have their customers’ best interests at heart, have recently ceased updates to their own image catalog software Aperture and even removed it from being downloaded via their App Store; again, even if it might ‘run’ on computers for 2 or 3 or 10 more years, we won’t let you have it.

So, about that exit strategy.

The only real options is Adobe’s Lightroom, part of their Creative Cloud photography software suite. My main concern was what I needed the software to do, per my previous workflows: I need to geolocate photos; I need my tags library; I need uploading to Flickr. That’s about it, really. Everything else I can learn or adapt to – especially if keyboard strokes are included, I move fast that way!

So I began diving in, and here’s that experience summed up in one word: Fffffffuuuuuuuuuuuuu!

First there was downloading the app. You don’t actually download the app, you download an exe that downloads the app. (Nevermind that Adobe had two existing accounts for me that can’t be merged and are some holdover from another bygone app-era, the profiles were locked in ways beyond my comprehension, and I couldn’t even get to the downloader without having an account.)

This process only took a mere ~15 minutes. ::rolleyes::

So yeah, a full quarter-hour later the app was finally ready to install. Hurry, click go yes I’m ready let’s do this!!

OK now I’m running the clock, this is ridiculous. 18 minutes later it was finally at 99%: 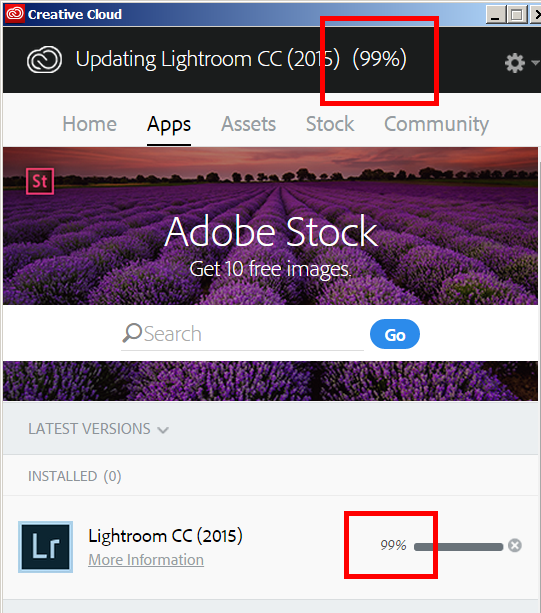 And that lingered for yet another minute.

So nearly an hour to download the app that downloads the app and install the app. An hour. And this is cloud-integrated software! (And I’m on a 50Mbps download connection!)

It just won’t stop! But what are those functions that don’t exist?

The only thing I really wanted to see was how Maps and geolocating is integrated with the software. Does it take one click? Two? Two clicks and three menus? I wanted to see the process.

And then there was the final stamp on the package:

I haven’t even used the software and already the 15-day trial is expired. I give up. I can’t keep fighting bad software prompts. I guess I’ll have to pay a $10/month fee for one month just to test maps functionality. But beyond that there were some other hiccups, like having to search ‘how to add title to images in Lightroom‘ – TITLES (and CAPTIONS – note Adobe’s own instructions are worse than blogs online)! The software is so esoteric to me, to the point of being recondite. Lightroom also cannot constantly search the Pictures ‘library’ in Windows, claiming that it’s a library, not a folder, and it only imports folders; so now I’m going to have to relocate all the folders in /Pictures/ and then re-align Picasa to search a new ‘folder’ just to maintain some backwards-compatibility between Picasa and my former workflow. Also for whatever reason the ‘Auto Tone’ feature in Lightroom is outright wrong. It blows out whites and doesn’t embrace color in the way Picasa just worked 99.99% of the time exactly the way you wanted; now I’m going to have to spend 20-30 seconds manually adjusting each image by stop-increments of 1/3 or 1 – and I take a lot of photos!

So what’s the point?

I guess it’s that I hope companies like Google – and now I’m looking at you Adobe – are made aware of the frustrations they put users through. Not so much because they bought a piece of software in 2004 and sustained it for another 12 years, but because when that moment comes to end-of-line the software, no other solutions (or – gasp – partnerships with other companies) are provided. I mean would it be so much to ask that the “Picasa team at Google” and Lightroom partnered to provide an export/import service for longtime Picasa users looking for future compliance with features they’ve been accustomed to for over a decade? I imagine Google could even get some kickback that way – yes I get it that means dedicating personnel and time/money but it also means satisfying your users and not simply shuttering your shutterbug service and leaving them to figure it out.

feature image horked from from PetaPixel.