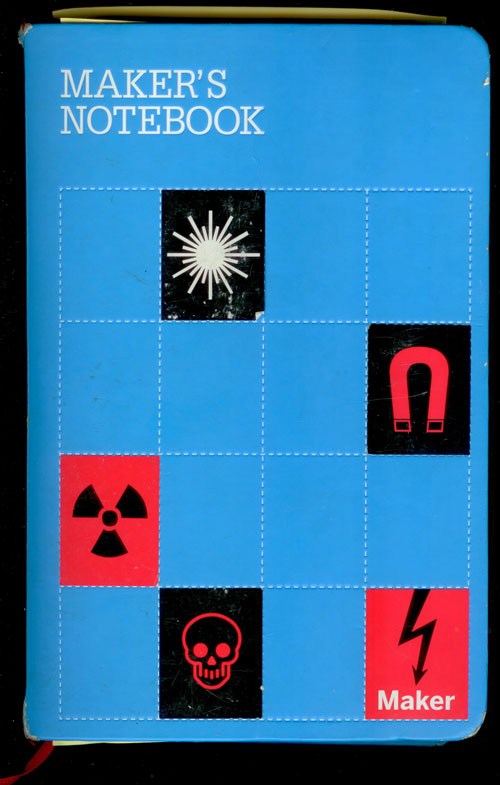 So yesterday morning, real early like, my phone beeps me awake. It’s early, around 7:30am. My phone never beeps this early, or if it does I never wake up to it. For some reason this particular morning I not only woke up to it but was even further-bothered to actually pick up my phone and see why I was being prompted. I glanced at the home screen – oh, new email. Go figure. Nothing new there, I get new emails every hour, whether I’m awake or asleep. Then I actually opened up my gmail, which I NEVER DO, at least not at 7:30am! WTF was I doing!?

Well, I had this short-n-sweet email waiting in my inbox, from someone named Jason whom I’d never met before – the subject was simply “makers notebook”:

Found a notebook of yours at a swap meet thing a while back. Was just flipping though it and it looks as though it might not be something you want to lose. Let me know…

Around 7 weeks back you’ll remember my notebook was stolen at a public swap event.

Stolen. Swapped. Pinched. However you describe it, I went 7 weeks without some very valuable information. But it’s just information – names, websites, notes, drawings, etc. Nothing very valuable, and nothing I couldn’t recompile over time. Granted time was a factor in my planning of the forthcoming World Maker Faire, and after my notebook was swapped I went a couple days without going outside because I was so shook up. But the event eventually made me start thinking differently about information, how I record it, how and where I access it, etc.

Don’t get me wrong I’m super-happy to have the very physical and analog book back in my possession. But as I mentioned to Jason during our conversation over a couple rounds of beers at the Bohemian in Astoria, I’ve started to migrate more of my sensitive data to the cloud, and automate my backups more frequently. Oh yeah, that was another weird thing, was that of all places Jason lives in Astoria, and I in Long Island City, and that he’s even biked by my studio on numerous occasions, so pretty wild to think that my book was so very close to home all those weeks!

A full-time practicing nurse and self-avowed biblioholic, Jason admitted that he originally swapped the book because he recognized the “MAKER” label, and thought the book might be something about maker culture at large. Like I said, a biblioholic, the book sat in a pile of piles of books until he got around to “flipping through” his swap items. He quickly realized the mistake, and thanks to my information (POBox, phone number, email, even a bit.ly shortlink to my web domain!) being written on the inside cover, he contacted me with the above quoted email.

And while we both operate in completely different worlds it turns out we had other ideas and interests in common! Jason is originally from Albany and just happens to be the announcer for the Albany All-Stars roller derby team – a sport which I’ve developed an interest in over the past year or so. We also talked about Creative Commons licensing, copyleft and hacker cultures, cloud-based storage, how we hope Google never become evil like other info-giants, and the interesting dilemmas that technology forces us to reconcile given our previous multi-millennial dependence on analog interactions.

I also showed Jason how I moved on to a new notebook, and even had a section in my new notebook titled “stolen notebook notes” – notes I was attempting to remember or recall, or which I was reminded of in conversation or email. Jason had some regret in recognizing how much trouble I went through, but I let him know that there were no hard feelings, and it was pretty obvious that it wasn’t intentional – so in turn I gave Jason a brand new Maker’s Notebook!

Mostly I was just happy to see my notes again: 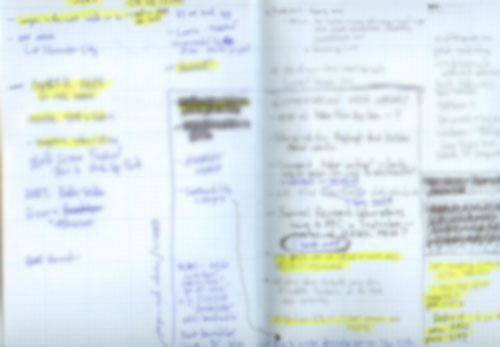 I have this method of blocking out data I never need to see again, while highlighting other information that is “done” but which I want to recall if necessary – everything that isn’t blocked or highlighted means it’s still being worked on!

And of course some drawing notes and other projects that have already happened or should still happen in the near-future I hope: 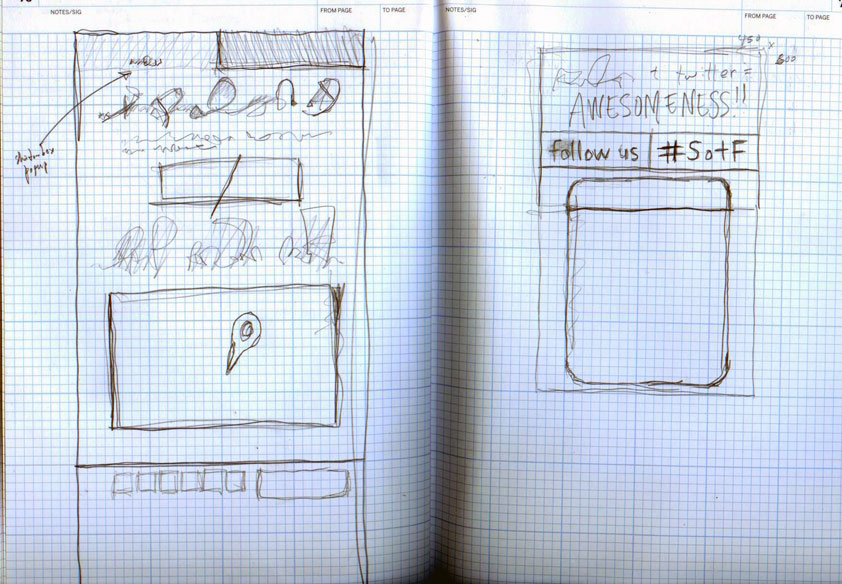 In total around 60 pages of notes, spanning 4+ months. I’m almost not even bothered to write in the old notebook anymore, because I’ve moved on to a new one which has a different layout and purpose. But damn was it rewarding to open that thing up and read all those names and details again! Hell my neon green push-pencil was still in there even – man I missed that pencil!

Most important to me now is that there are a good few dozen names that I’m reminded of, people with projects that I want to participate in the forthcoming World Maker Faire – and there’s still time for them to apply to the open call so I have a lot of work ahead, and suddenly it feels less stressful, more exciting again! And I told Jason that I’ll get him some tickets for his good samaritan assistance. It’s going to be a blast!