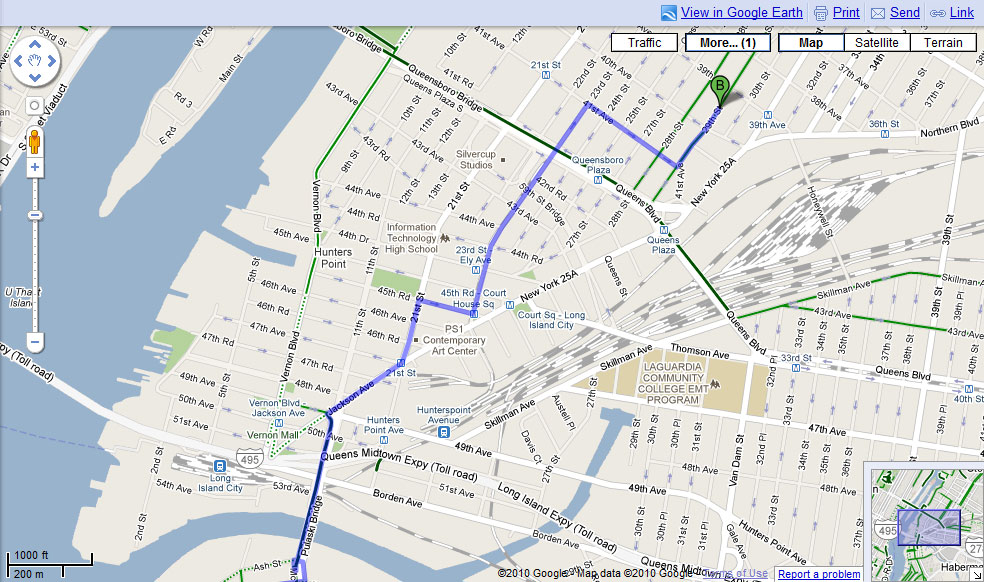 FINALLY! And they’re pretty spot-on too. Like the map above, which I plugged in for cyclists coming from Greenpoint/Williamsburg up into Long Island City, the map actually recommends taking 23rd Street, which is also my preferred route. Of course there are nuances to the maps that I don’t agree with. Like how they recommend to ride out Jackson Avenue for a couple blocks until you get to 21st Street, then turn left onto 21st Street. If you know either of those streets, you know they’re riddled with fast-paced taxis, big buses and holes in the ground that gremlins live in. Not safe. I prefer to immediately head out 11th Street or even safer I cut over 49th Ave to Vernon Blvd then ride the Blvd BIKE ROUTE out to 44th or 43rd Avenue before cutting over to 23rd Street to head north. Also, once north of the Plaza I don’t like heading east on 41st Ave. It’s uphill, and crosses two major intersections that cabbies use to head towards the bridge. I prefer to head to 39th Ave and have to circle back a half-block, which I see as a fair trade in exchange for increased safety and visibility.

But it’s in beta and they’re taking recommendations. My Android phone is not yet updated with a bicycle icon, but soon enough – and this shows you why Google is so much more a pro-active company than Microsoft or Apple Mac (who make great hardware but never spend the capital to make socially positive apps like this for their user-base!).

JUST TO CLARIFY: The bicycle directions are available when you “Get Directions” – drop down the transportation menu and select “Bicycling”!