why the numbers might not matter this time #Election2016

[UPDATE: this post was drafted March 10, just prior to the March 15 primaries that saw Rubio drop out and Kasich win Ohio; I forgot to publish it at the time, so for context this was written then, but applies to the future.]

Seven years ago I predicted Barack Obama would win the Democratic nomination, and not because he had a better stump speech or I felt a yearning for his brand of exceptionalism, but because he was uploading images to Flickr more often than Hillary Clinton. Yes you read that right. Pundits talk about the role of social media in elections today. Where were they in 2008? That moment already happened. Now, granted, myspace was still a thing back then, but here’s what I wrote at the time:

so I’m going to make a prediction here: the contender with the most content WINS. simple.

no political insight, no analysis, no “deep” dialogue here folks. the MOST content WINS.

here are the current stats:

per my analysis my decision is obvious. but this is only a prediction!

I wrote that on January 28, 2008, just under one year before Barack Hussein Obama would be sworn in for his first of two terms in office. (Aside: on the eve of his inauguration I was biking around the Lower Ninth in NOLA, reminiscing about the tragedy of Katrina and the legacy of GW Bush on the American psyche – in more ways than one, GW Bush is responsible for Obama and for the now-current rise of Drumpf.)

So about that Drumpf phenomenon. And specifically about the numbers.

I’ve been scrutinizing the numbers for some time now. And unlike the pundits I’m not paid to feed false information – I’m being purely subjectively-objective about my analysis.

In 2012 it was then-Twitter’s ascendance and the discrepancy in Willard Mitt Romney’s numbers; I’m still certain that was a bigger scandal than the press gave it coverage for, but it essentially backs up the claim that I’ve been making for nearly a decade now that Republicans simply don’t understand “social” because at its heart is organic growth, and they’re very much in favor of systemic growth instead. (Nevermind that all of Willard’s former mi.tt shortlinks now redirect to a Chinese-language 404 error hosted on pna.cn – pretty much an indicator of how he would have ran the country.)

A year ago I showed how Chris Christie was never going to even have a successful run at POTUS let alone be POTUS, because of his inability to draw crowds in Europe the way Obama did 7-8 years prior.

And perhaps most explicitly I gave an analysis after the 2014 midterms that was very numbers driven; and that actually is sort of a springboard to today. In that analysis I showed how while numbers across the board were up especially in “red” states, red voter turnout was actually down and blue voter turnout was actually up, only the differential remained that there were more native red voters than blue so elections still went red.

This year the rules have changed. But I want to make a couple predictions, and even one outright declaration.

The first, which is more of a gut-prognostication, is that Drumpf will go to the Republican Convention in July with just-under the 1237 threshold needed to secure the nomination. I’m not concerned with ‘what this will do to the Party’ – I don’t care. But a rule is a rule. Everyone is saying if he’s ‘within target’ of 1237 it’ll be hard to wrestle the nomination from his hands; but 1236 is not 1237! A rule is a rule! So no it wouldn’t be hard; and not having the majority of delegates doesn’t even imply a struggle will take place, it simply means the delegates are ‘bound’ to their winner in the first round. And I’m prognosticating that the first round will be just below the threshold – now that would be interesting!

Beyond the convention, pundits are proclaiming this the Era of Drumpf, with his ‘surge’ in numbers-capability that even Obama didn’t have in ’08. OK, that’s interesting – let’s examine that thought.

Out of the gate I’d like to declare: it doesn’t matter. No one is actually voting for Drumpf, or Cruz, or Rubio. OK there are numbers in play, but let’s examine just how many:

Kansas was a Caucus, but still. The numbers were:

But here’s my main thesis…prediction:

This time around Ted Cruz alone got nearly as many votes as the entire voting populace in the 2012 primary. This translated to:

Everyone – public and pundits – are looking at those numbers and going, “Surge. SURGE. SURGE!!” Texas accounts for a 95% increase in primary voting over 2012: 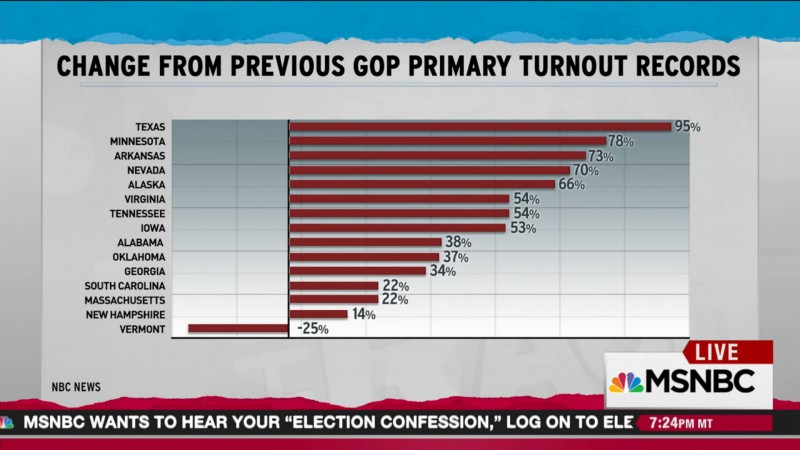 OK, that’s interesting. Texas awards 38 votes in the Electoral College. So this is where it gets real interesting.

You could have nominal turnout in a state like California (55 votes) and a surge in voting in Texas and the results won’t matter.

I predict: Republicans will win the popular vote but lose the Electoral College vote!

Less than 3.5M (or 0.02856% of the votes cast) separated Willard Mitt from Barack Hussein, but the electoral college difference was 332 to 206! That’s a 38% spread differential! Mitt got crushed!

This time around, 3.5M more people could easily come out and vote for Drumpf, but it won’t matter if you don’t win the states where the delegates count. In other words, win the popular, lose the Electoral College.