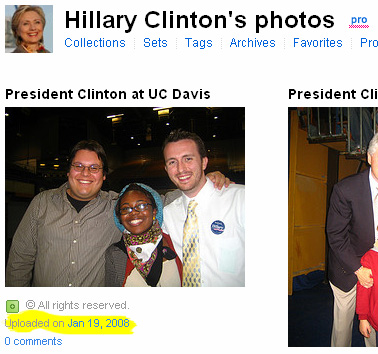 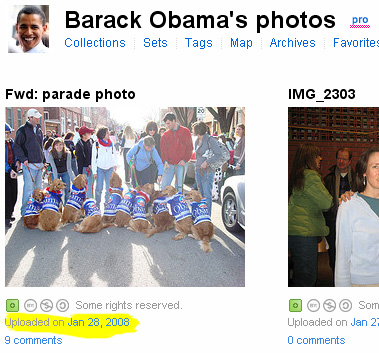 Hillary Clinton’s campaign trail haven’t updated their Flickr account for nearly 10 days now. what this tells me is they’re on vacation.

I don’t watch news television (too media-controlled), I don’t listen to news radio about the current election campaigns (too sound-bitey), and I merely glance at articles in the New York Times about them (they look nice though). I consume most of my content via the nets. Clinton and Obama (the two major contenders are all that matters now really) are both in my feed aggregator. I get their Flickr feeds and watch their YouTube videos.

so I’m going to make a prediction here: the contender with the most content WINS. simple.

no political insight, no analysis, no “deep” dialogue here folks. the MOST content WINS.

here are the current stats:

per my analysis my decision is obvious. but this is only a prediction!

(I will commend Clinton’s website designers though. they make the links to her external media very big, colorful and obvious, albeit at the bottom. Obama’s links are on the sidebar, way down, small and greyed out, not so easy to find. See for yourself: Clinton v Obama)