A quintessential work of Constructivist architecture, which once used to float on columns but whose space between was filled in to provide additional housing, which also contained a solarium, roof garden, communal kitchen and library among other facilities, and oft-cited as inspiration for Le Courbusier’s Unité d’Habitation, is these days in complete and utter disrepair.

The structure, home to some 50 apartments, including some spacious duplex quarters, is now at less than half capacity with most of the other apartments in disrepair, and is potentially to be demolished by the city of Moscow, its current property holder, unless another course of action is taken (suggestions have included affordable artist studios to expensive middle-class housing).

The building is also listed on the 100 Most Endangered Sites of 2006, presented by the World Monument Fund, a non-profit ‘dedicated to the preservation of historic art and architecture worldwide’. 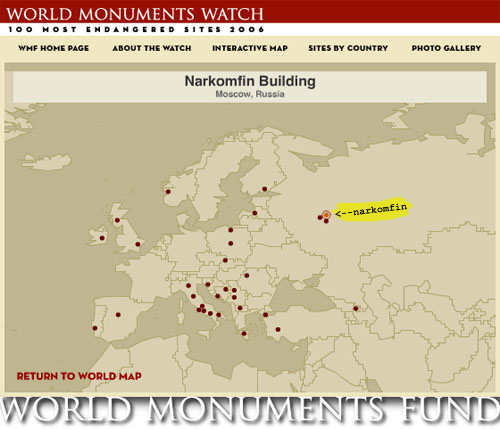 Too bad we can’t see what those Russian climbers might be able to do with this building, eh?