(This blog was drafted ~one month ago — I’ve attempted to get the person at the heart of this story time to reply before publication, but they have not commented thus far.)

First a tour of LIC!

I’ve lived in Long Island City for 14+ years. I was originally attracted to its town-like feel, with its immediate proximity to the ‘big city’ of Manhattan just across the Queensboro Bridge. At the time I moved here other than the “Cititower” the next tallest building — at a whopping twelve storeys — was the historic clocktower at the foot of the borough’s namesake bridge (a clocktower it should be noted that developers wanted to demolish, but have since resigned to building a 68-storey tower looming over the clocktower after the clocktower gained landmark status). The neighborhood was filled with two or even one-storey warehouse buildings; buildings in the neighborhood that were five or six storeys high were tall — like wow tall compared with surrounding structures — and most residential locations were three storeys high at best, with most being two. (I myself live in one of those two storey structures.)

Mayor Michael Bloomberg — known for his aberrant non-democratic third term— changed all of that, and the entire neighborhood underwent a rapid rezone-and-development that left entire sections of Long Island City without amenities like a postal office, school (for all the new supposed residents), pharmacy, etc. Summed up, Citylimits.org wrote in February 2017,

While the Bloomberg era rezoning of the area in 2001 was intended to catalyze the creation of office space, it instead lead to a proliferation of residential towers and a lack of retail amenities.

The monied interests began a wholesale re-imagining of the skyline residents never knew they wanted.

For instance I’ve played that made-up game where you try to see how many cranes you can see from a single vantage point:

Six cranes are seen here - a sixth is slightly hidden behind the power lines in the right-foreground - but I think my record is seven. The aforementioned clocktower can be seen in the lower-right, between the two cranes there.

I’ve seen entirely adequate 4-apartment homes get bought, demolished, and then the property essentially abandoned while the landlord/owner squats the land, waiting for it to skyrocket to ever higher values: 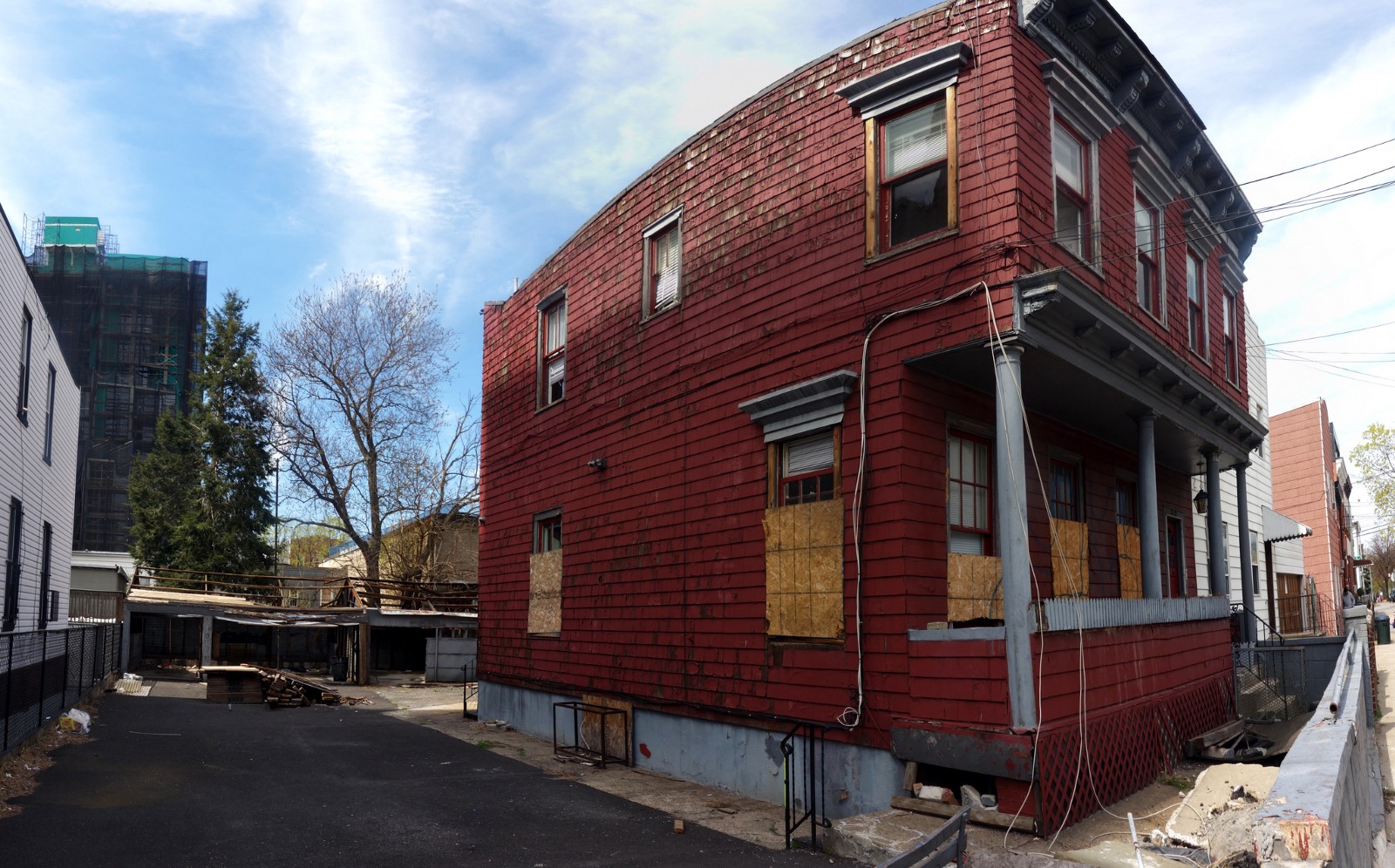 This house had four apartments with accommodating garages so that anywhere from 4–10 people could comfortably live here; note the evergreen tree in the background and the house to the left with the white siding. 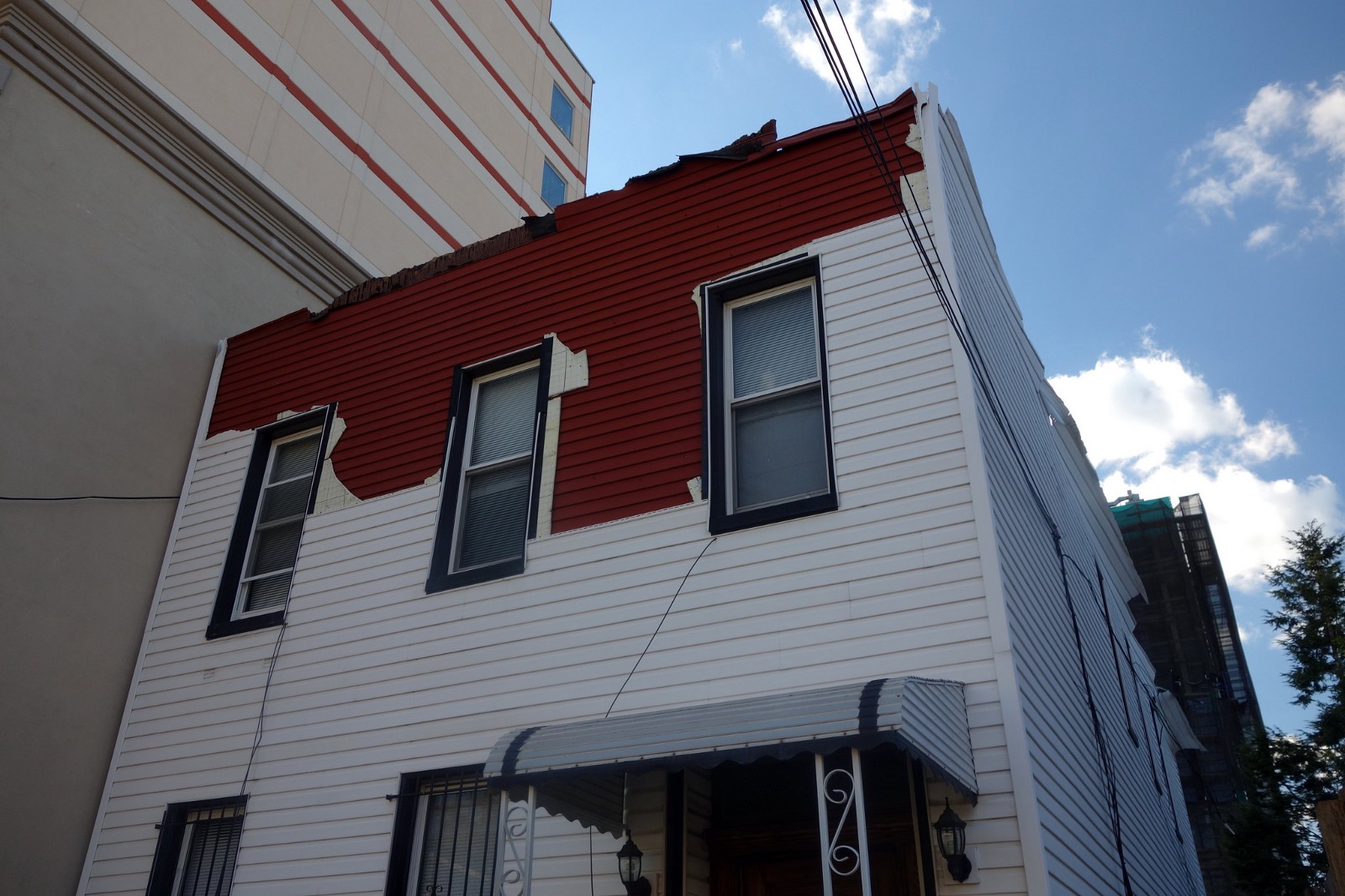 This is that house to the left with the white siding; torn down in 2013. 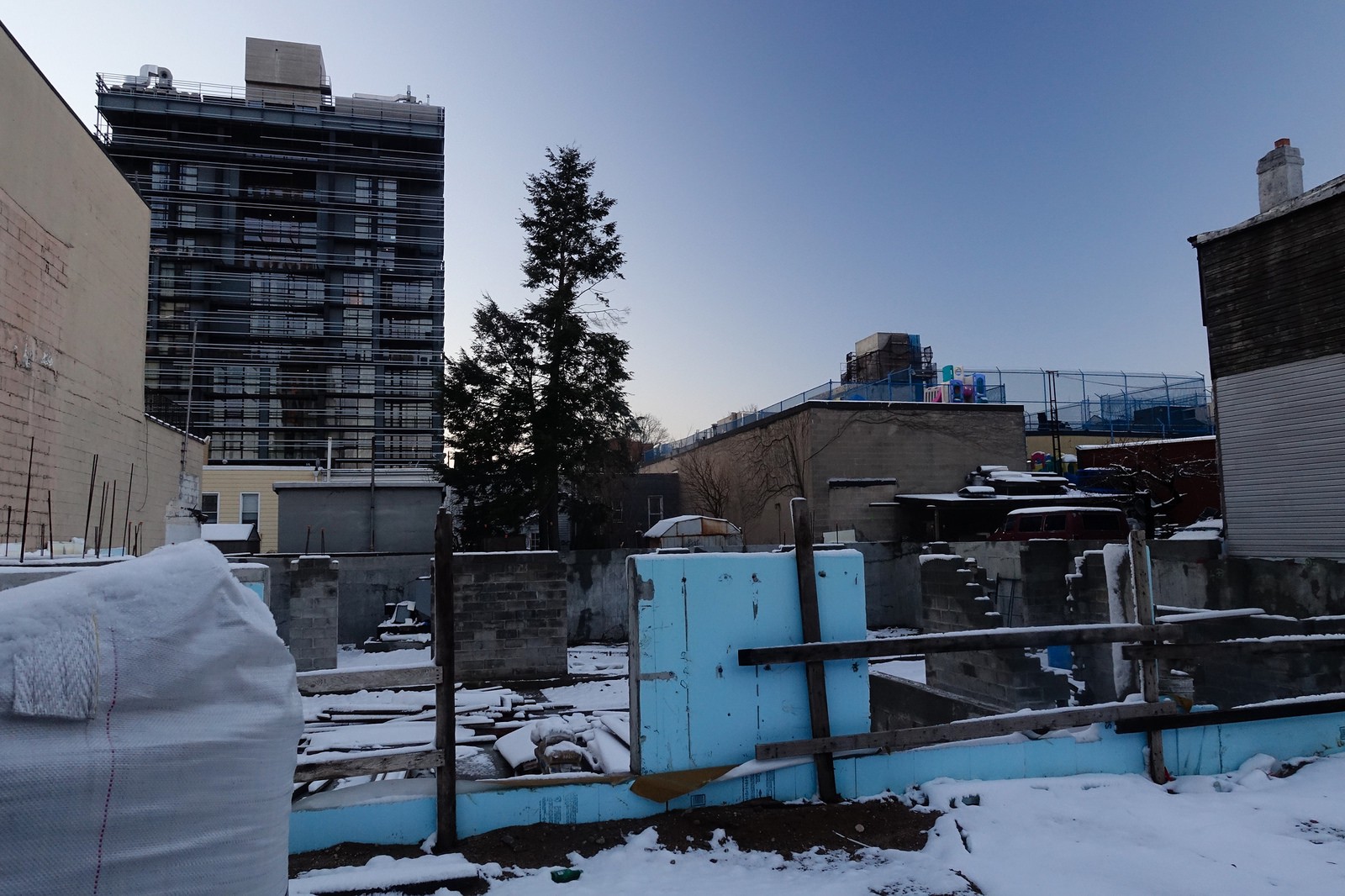 This is that same pair of properties in February 2016; it still sits abandoned like this. The property has been absent of development for ~5 years; that’s 5 years with fewer tenants in the neighborhood, and thus fewer taxpayers paying into local services. All so a landlord can make more money a decade from now.

I’ve seen entirely good — if quirky — sections of the neighborhood (that housed local coffee shops, taxi offices, long-time tenants, etc) get torn down and replaced with towering towers of hotels and condominiums that frankly no one from the neighborhood can afford: 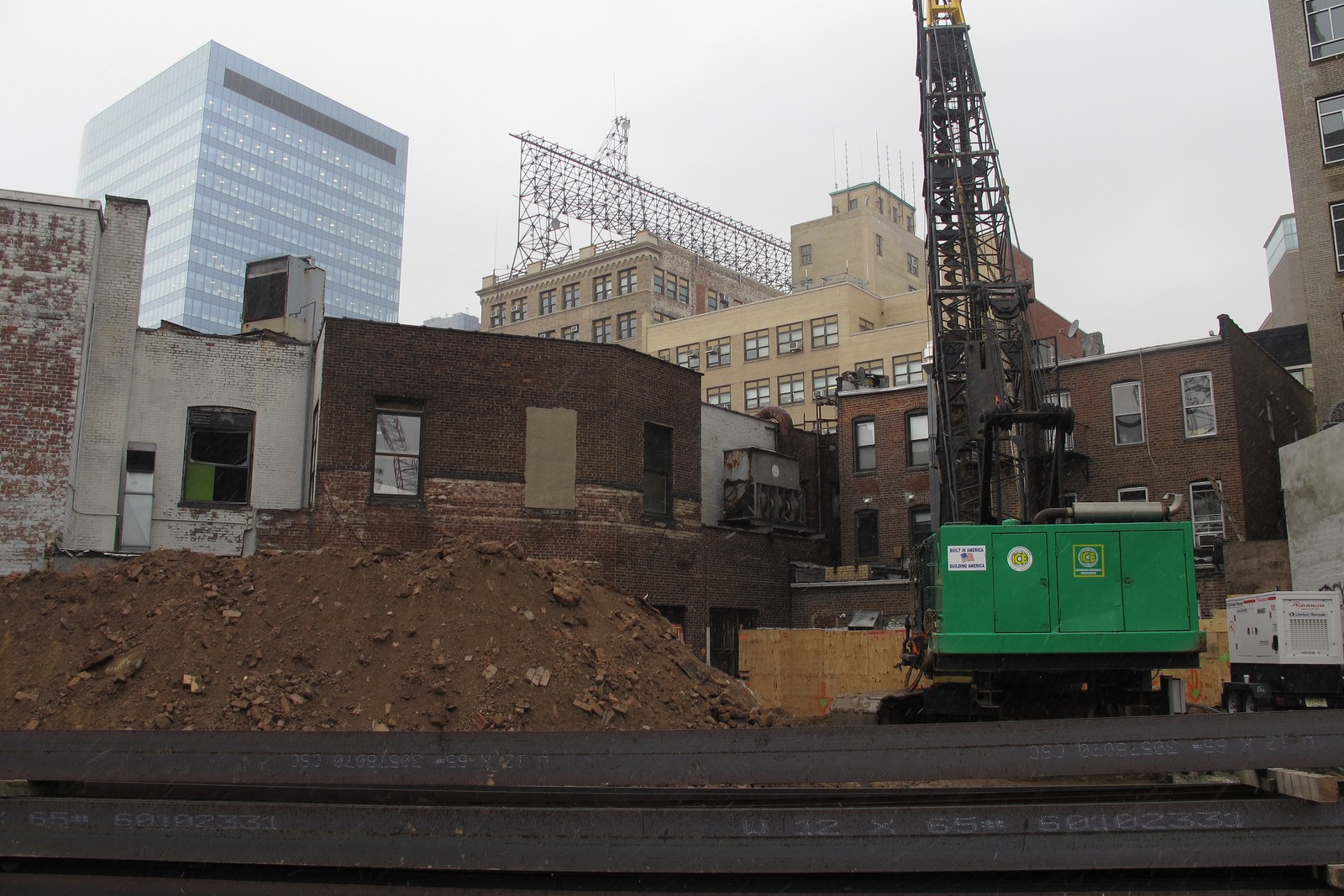 This triangle-corner wedge of two and three storey buildings was torn down in 2012. 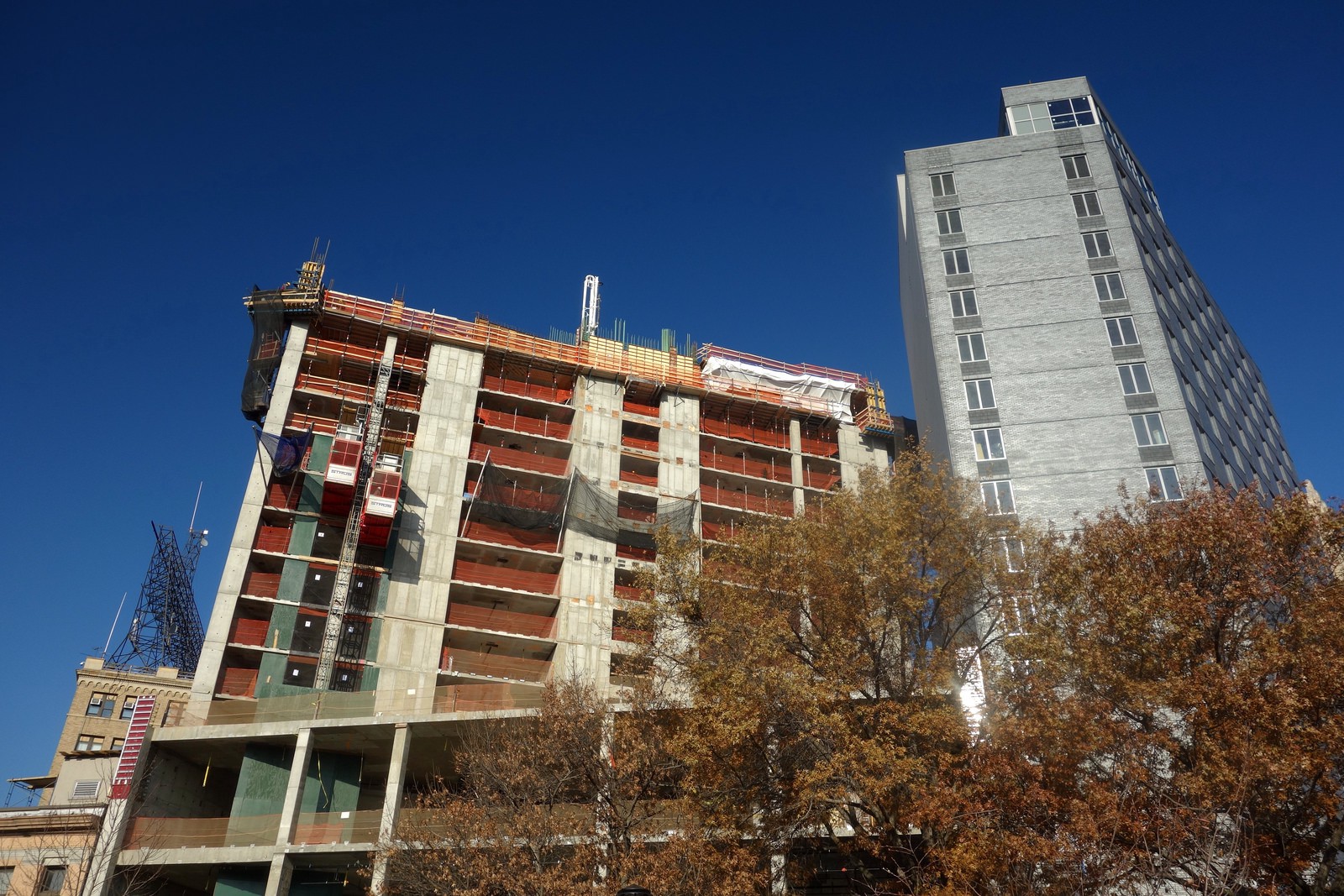 Here is that same plot of land seen in December 2014. The building on the right is a Hilton brand hotel (16 storey, 183 rooms) and the building going up on the left is a Marriott property since completed (31 storey) that houses a hotel and condominiums on the higher floors with apartments “from $2800” per month.

Get absolutely swamped by construction usually resulting in tenants getting priced out or pushed out; typically the only buildings that survive as-is are those owned by the government or one of its agencies:

It should be noted this vantage point is no longer possible, as this corner property has since been replaced with a towering tower - not a public park for all the people moving into the neighborhood, but just another building, more structure without accommodating infrastructure, etc.

Here is that same stretch of development further along from the backside: 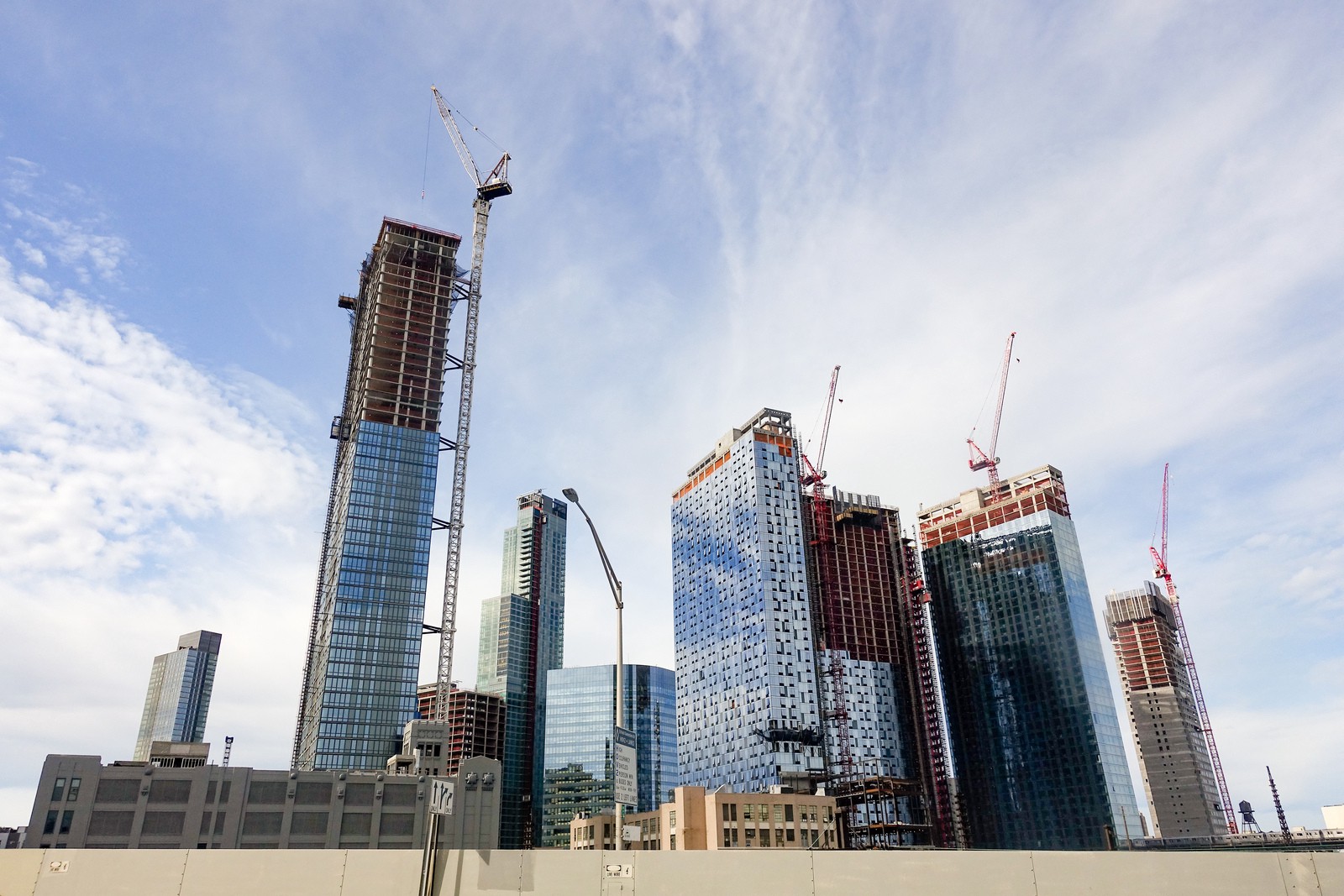 10 years ago only the older warehouses in the middle ground would have sprouted above the concrete barrier in the foreground; the 7 subway train can be seen in the lower-right corner.

As I dislike to say, they’re filling in the sky with buildings. 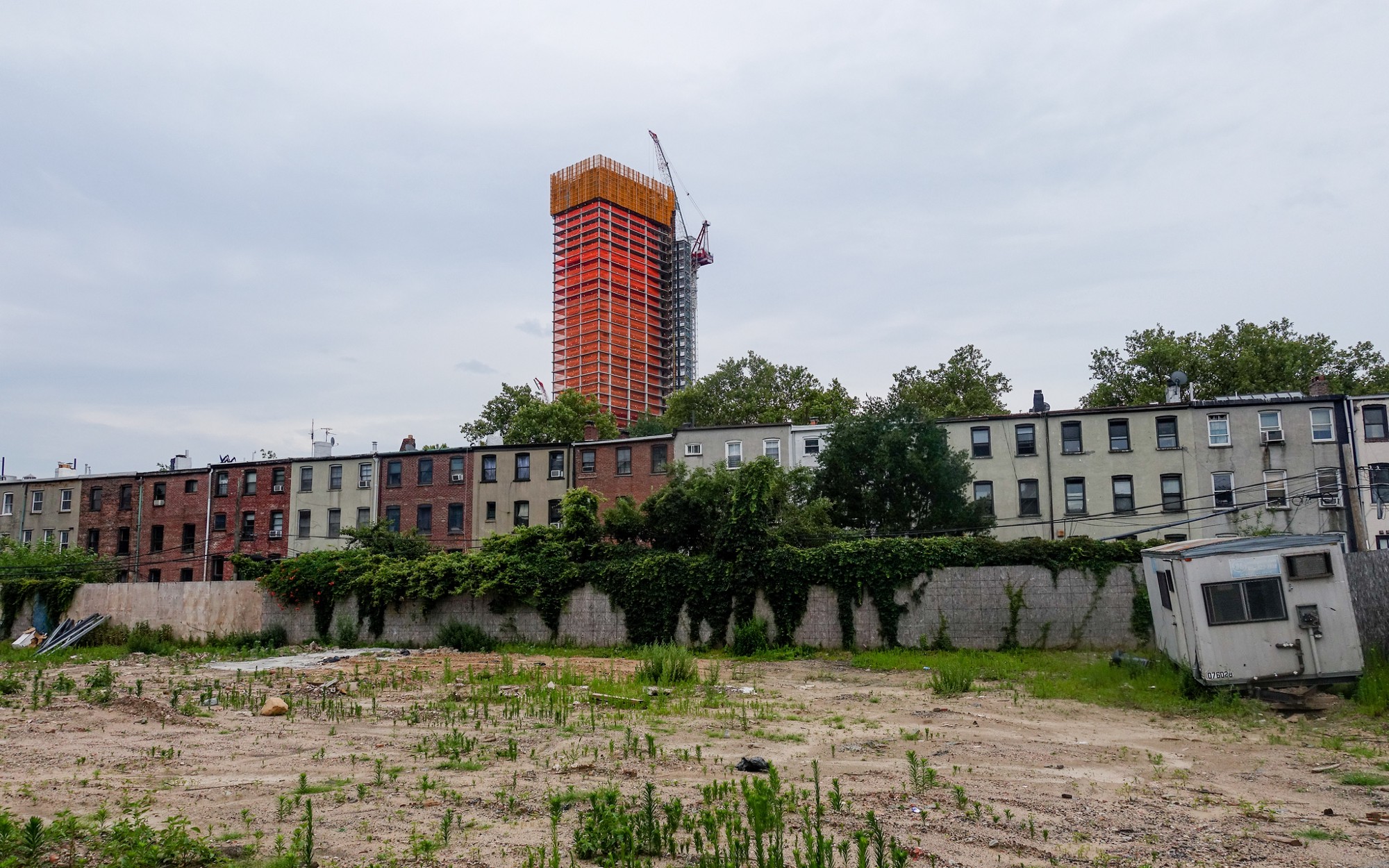 As I dislike to say, they’re filling in the sky with buildings.
The excessive development leads to perspectives like this:

(I love Long Island City — you can see literally thousands of shots of the neighborhood here on my Flickr account.)

All of this before Amazon even announced their recent deal, let alone before they begin construction!

Which is why I found it a bit odd when an apparently generic Twitter account was one of the first replies to a series of tweets by the recently elected Alexandria Ocasio-Cortez — the tweets which were picked up by major news outlets (and apparently drew the ire of Amazon officers):

The generic account I refer to has since deleted its reply tweet, along with any associated reply tweets; my replies to their deleted tweets remain, and are record that the exchange did happen; also I managed to screenshot some others, and below is how I recall this all played out.

The supposedly generic user account — @ArtistaPena — replied by saying they were upset that @Ocasio2018 opposed the Amazon deal, because they (the user) lived in the area and thought Amazon brought ‘value’ to the table; they described Ocasio-Cortez’s logic as a “fallacy” and they reminded Ocasio-Cortez that they are a taxpayer in her district. (I found their initial reply oddly specific — as if they were an insider trader. It didn’t resonate as emerging from a regular person, but it was unclear if they were a bot or troll. So I probed a bit further, starting with a simple question.)

Could you survive on $11-13/hour in NYC or do you describe these numbers as a "fallacy" too:https://t.co/oIyGjENByk

I'm a taxpayer too y'know.

@ArtistaPena replied by saying those numbers are “incorrect,” and that Amazon supports a $15/hour minimum wage. I reminded them,

Could you survive on $15/hour in NYC? 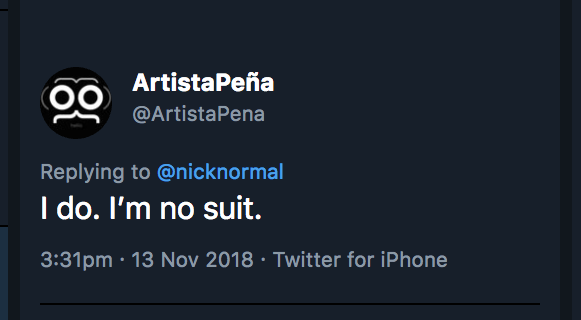 Their tweet is one minute after my question; they use Twitter for iPhone; my screenshot was taken via tweetdeck.twitter.com.

Now this is where it gets interesting. I already found the person’s defense of Amazon’s lobbying quite odd & specific. Why — how? — would a generic Twitter user know so much about Amazon’s lobbying practices? So I decided in the meantime to do a bit of research.

Turns out Twitter’s @ArtistaPena is apparently one of several accounts managed by Joanna Peña-Bickley, “Head Of Design, Internet of Things at Amazon” whose Linkedin bio uses the same artistapena slug: 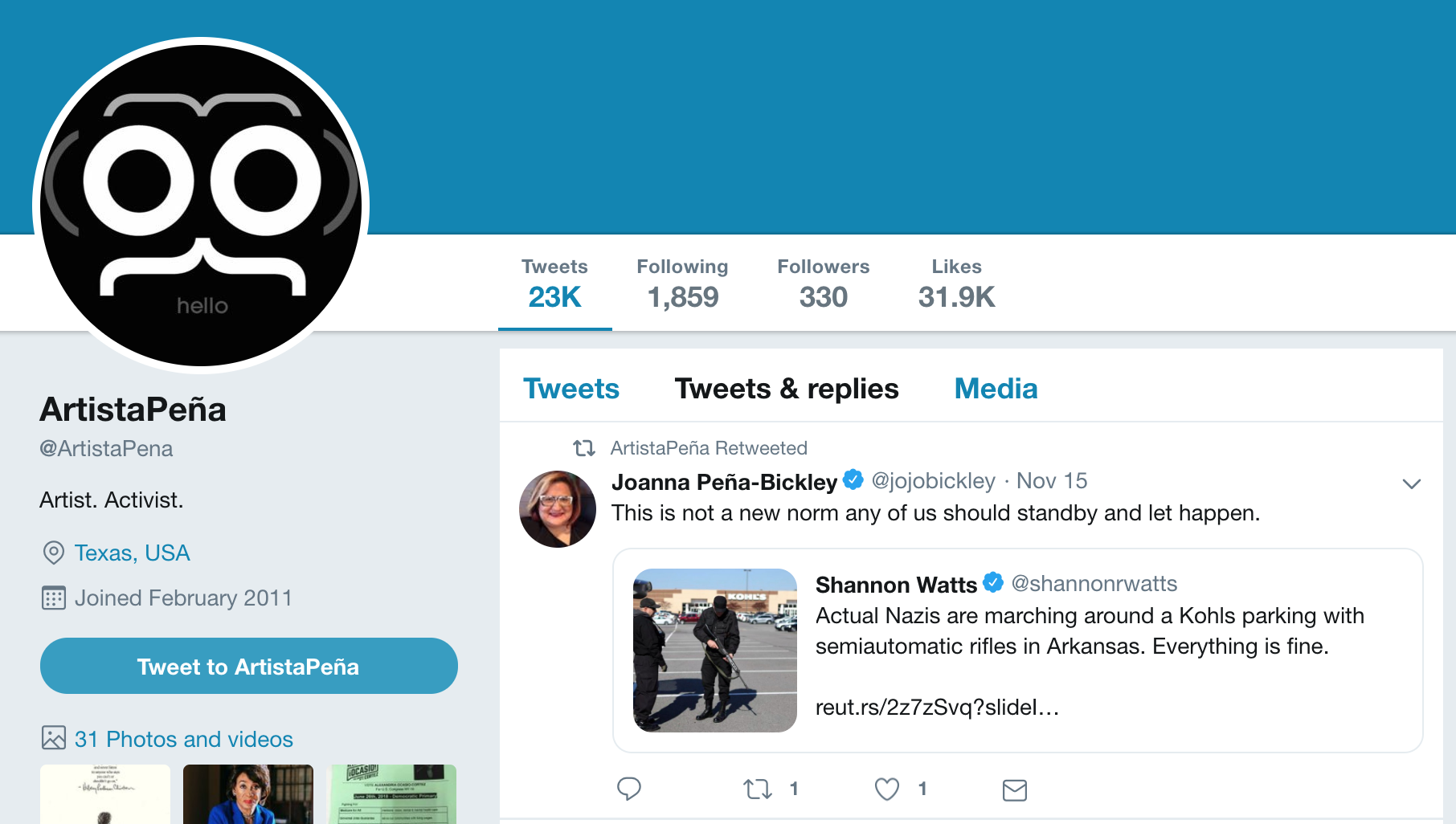 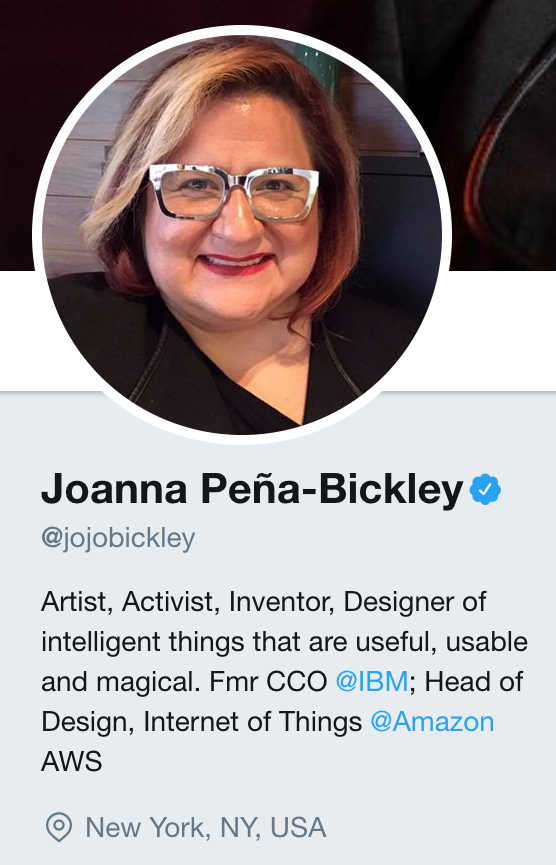 To recap: a former C-level officer with IBM iX and current “Head” at an Amazon department is astroturfing from a non-attributable Twitter account in an attempt to influence discourse on a publicly elected official’s Twitter thread; when asked if that person could survive on $15/hour in NYC they replied, “I do. I’m no suit.”

The following minute I asked the cloaked account (who was about to find out I knew who they really were) to provide proof of their pay stub: 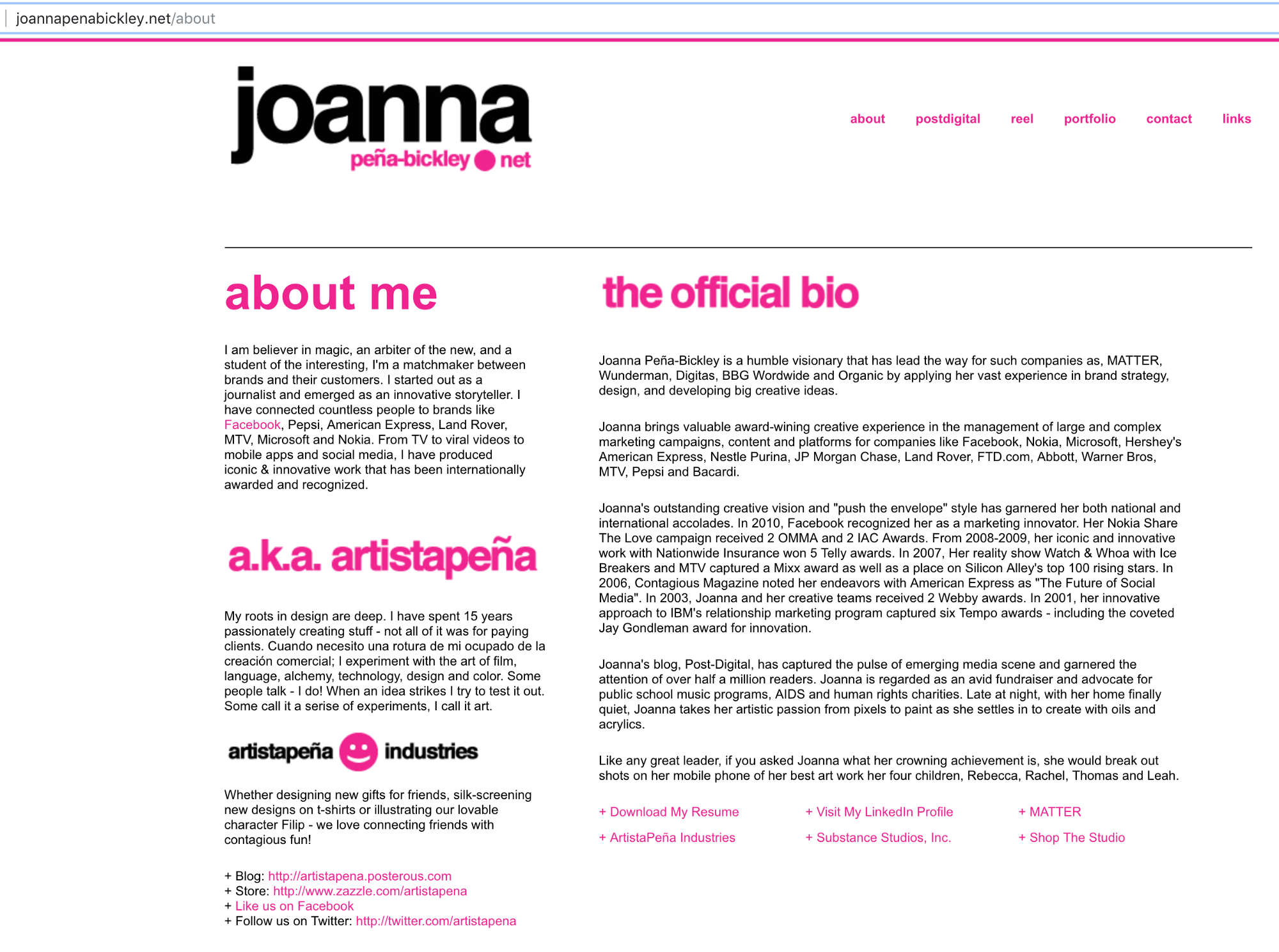 None of this was hard to find or triangulate. All of this information is public and available on the open web. All I did was search with Google to connect the dots.

So can someone please explain to me why an Amazon officer — “Head of Internet of Things” — feels the need to spend their day (with all their responsibilities and team to manage) astroturfing from a cloaked Twitter account in an attempt to influence public discourse? Why?

As a resident of Long Island City for 14 years I have some simple questions for Joanna:

Where do you actually live — in what NYC neighborhood?

What is your current rent? (Or do you own?)

What is your salary?

When you use the @ArtistaPena Twitter account is this in your personal capacity or at the direction of Amazon?

Joanna, “maker of magic,” “humble visionary,” why not use your actual personal account to conduct those policy questions directly with Alexandria Ocasio-Cortez? (You are, after all, cited on Reddit and other places as having some influence on conversations around technical issues like cryptocurrency and IoT — so why not use your same bully pulpit to talk to Ocasio-Cortez as an official executive from Amazon? Why hide behind a cloaked account?)

What a Trumpian technique, truly.

Speaking of. Joanna, show us your tax returns.

But we already know your response to that request too.

This blog was originally drafted & published at Medium — it is backed up here for 1st Amendment purposes.