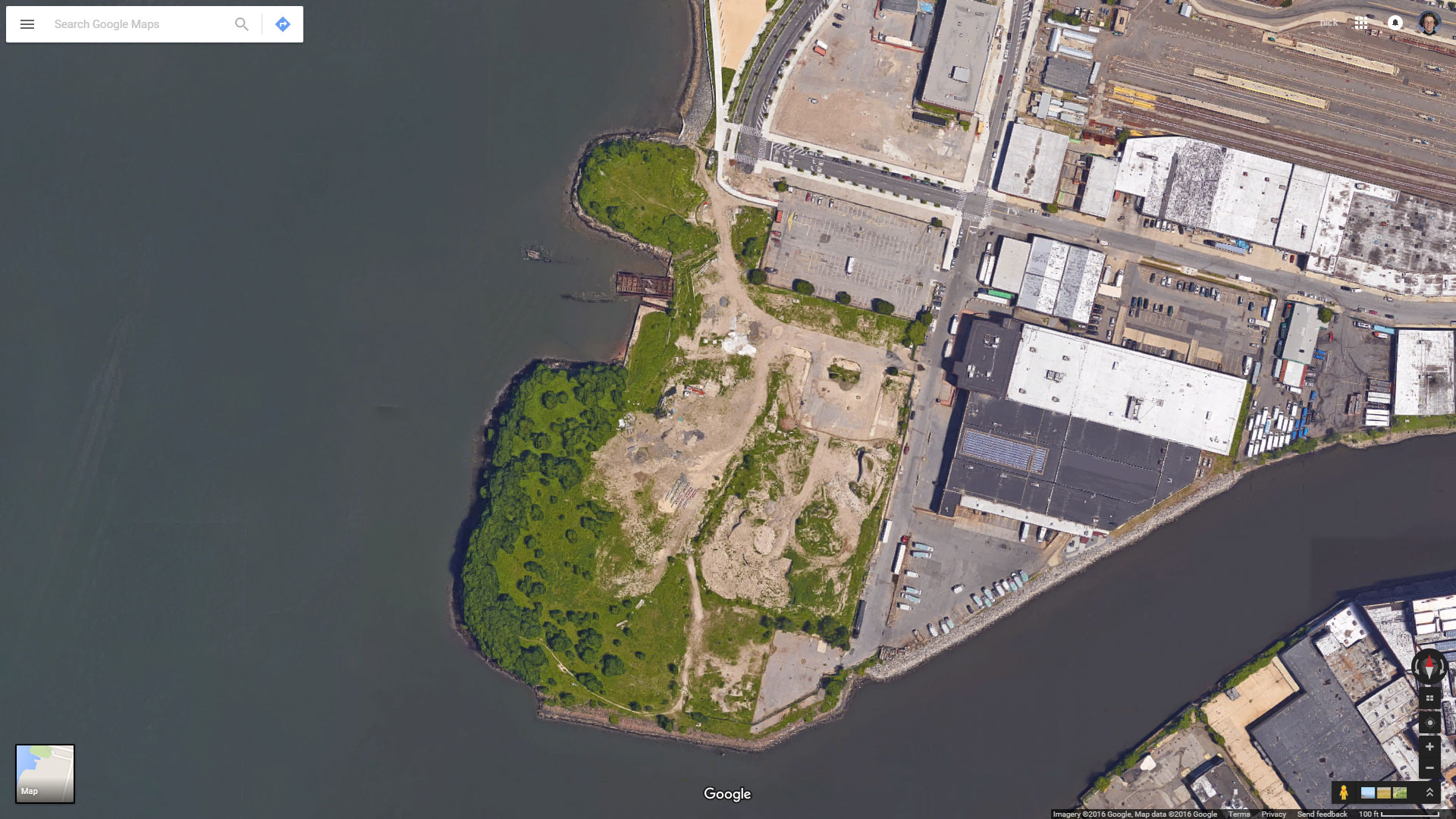 Chance Ecologies was an exhibition on view at RadiatorArts at the end of last year. It was comprised of “research interventions” in the Hunters Point neighborhood of Long Island City. Most of the ‘art’ took place in the Summer and Autumn of 2015 – as indicated by the lush amount of weeds and green-growth seen in many of the exhibition images (most of the vegetation being dead by December when the exhibition occurred). I didn’t know when I took a tour earlier that year the happening was leading towards an exhibition, but these are images from that tour.

OK first let me get one thing clear: it is Hunters Point, not Hunter’s Point. It is not possessive, it does not belong to anyone named Hunter. It simply has an s on the end, and can be seen clearly as far back as this map from 1891. (Curiously, the project – or is it project’s? – about page doesn’t even mention Hunters Point, while the gallery page spells it incorrectly, with the possessive ‘s.)

Hunters Point has long been an area of interest and intrigue for me in LIC. Long before the developments that now border the water’s edge (or is it waters edge?) went up, I scaled wooden plywood walls that have since been replaced by parks and piers and pleasant coffee shops. But there’s still that wild tip of land remaining, even now still undeveloped. It’s pretty remarkable really, that it’s still there – but it’s about to get gobbled up, disappear, and be made into more living space with wonderful waterfront views.

So one day last year a tour was organized to scale the now much smaller chest-high chainlink fence and explore the weeds and shoreline in the forbidden zone, all in the name of art. Here we go! 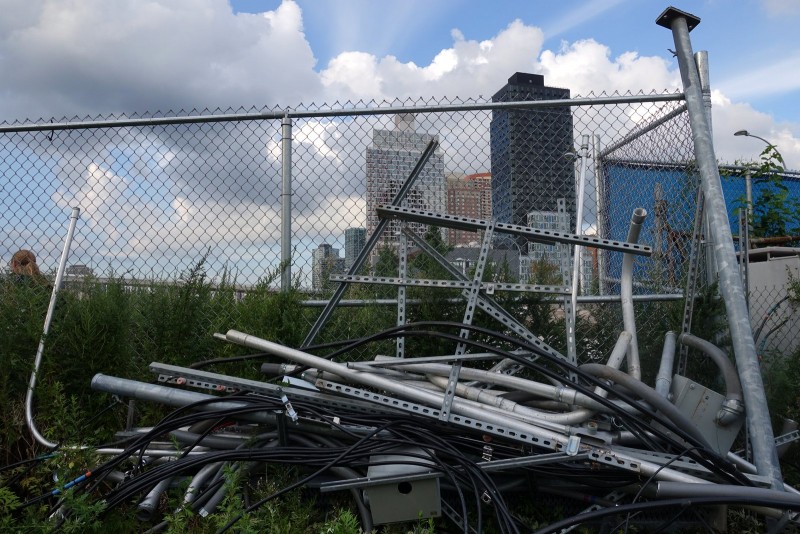 rubble for the taking

There’s one point along the fence line where it’s obvious that’s where you want to enter; the chain link is lower and there’s a post you can brace yourself against to scale over the fence. And after entering, just around the corner is this pile of debris, seen above. What’s weird is this pile has been here for years. It gets moved around, added to, taken away from, but it’s been a resident for a while now; I’m surprised no scrap metal collector has discovered it yet. 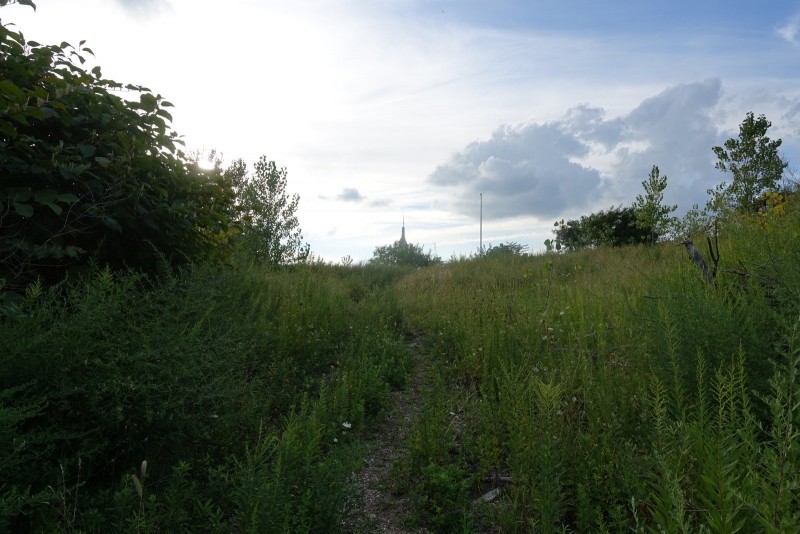 I’ve always appreciated the vantages from which you can see the top of the Empire State Building.

There are some good hills of dirt in Hunters Point, no doubt created from years of debris landing here. It’ll be interesting when they excavate the land to see what lies below. 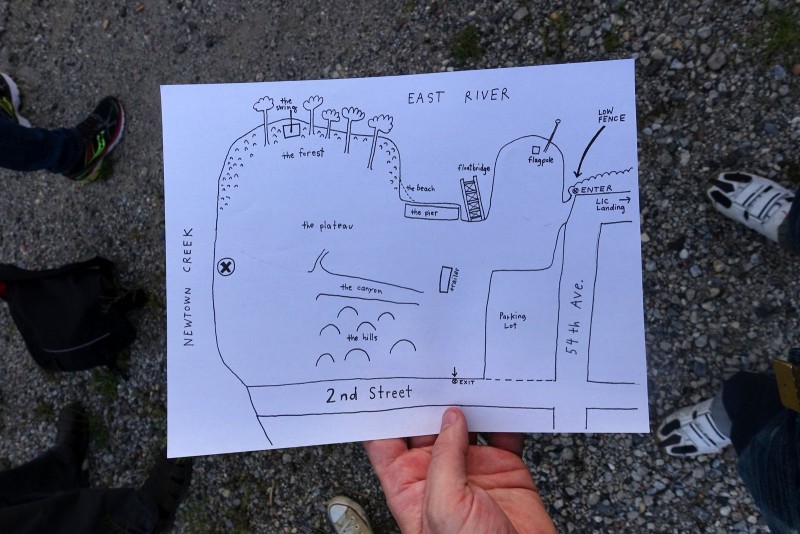 A hand-drawn cartoony map was given to attendees to find their way around the Point – the brush was high, with some grass above 3′ or 4′, so the map was vital for locating landmarks and getting your orientation. 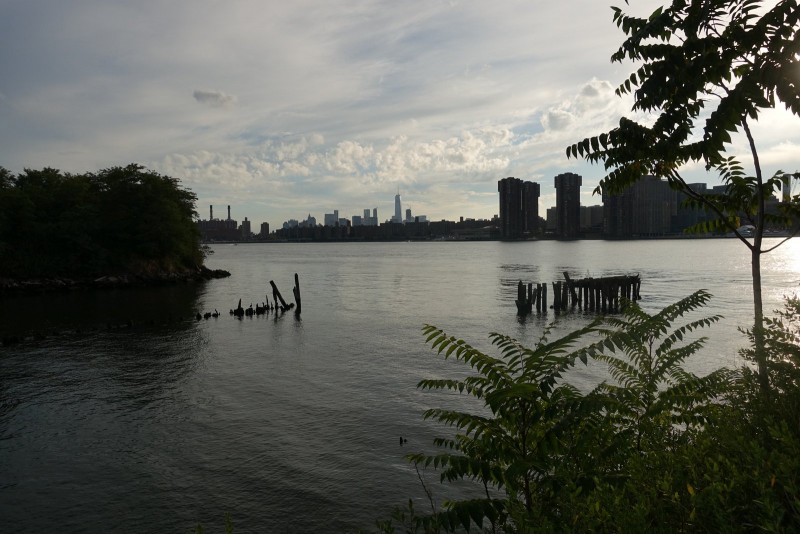 the Freedom Tower off in the distance 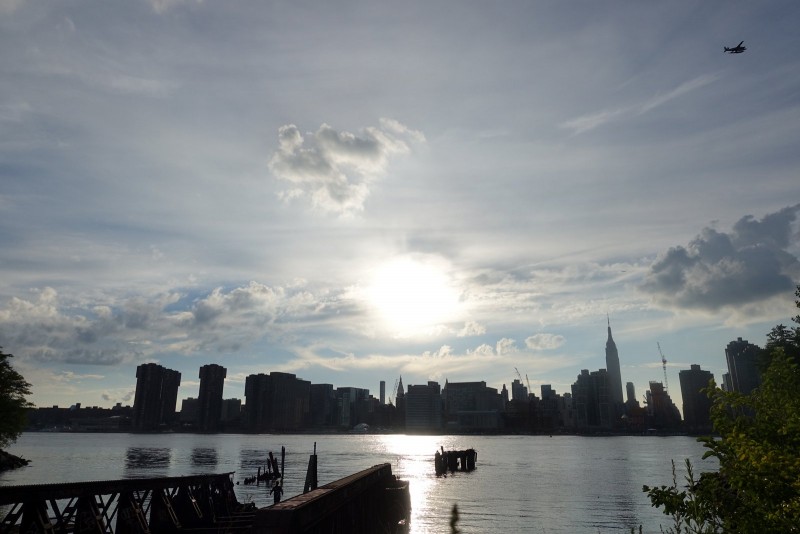 This shot has it all: Empire State Building, a seaplane, a person standing on an abandoned pier in the East River, and a wonderful sunset. I love moments like this in the boroughs. 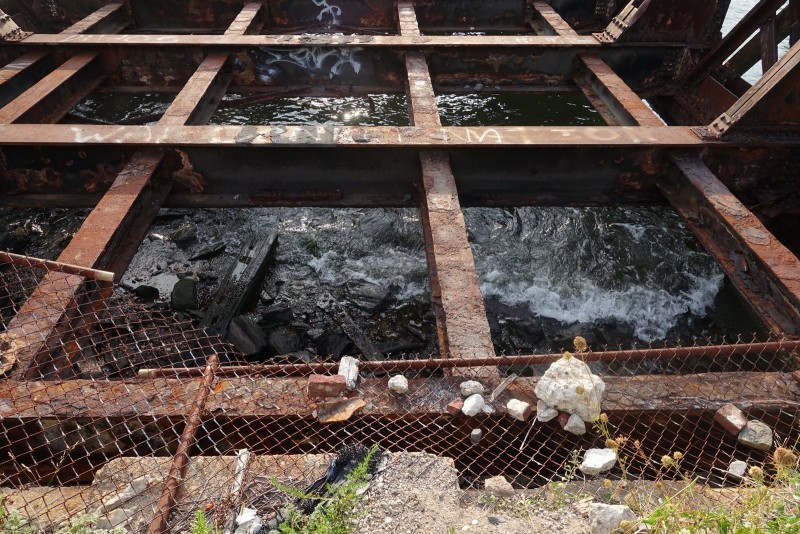 And when I say the pier is abandoned I mean it’s abandoned like falling into the River forgotten. 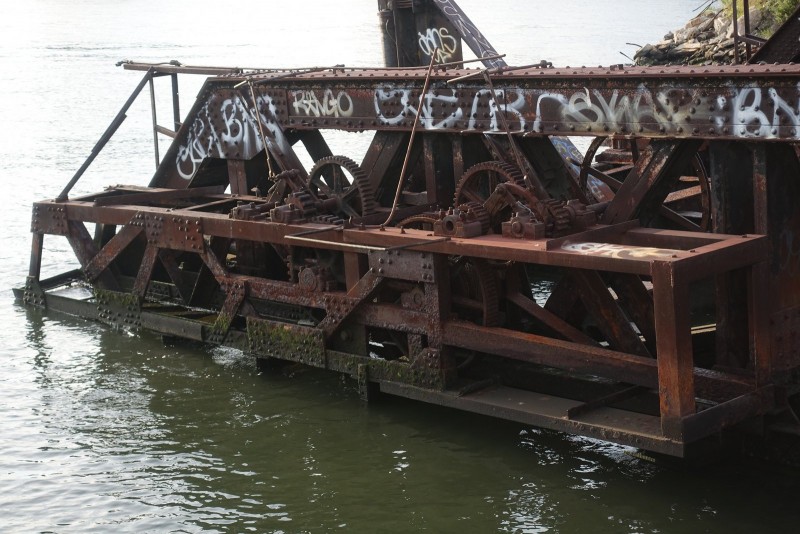 Some old gear pier is also rusting away in the River. 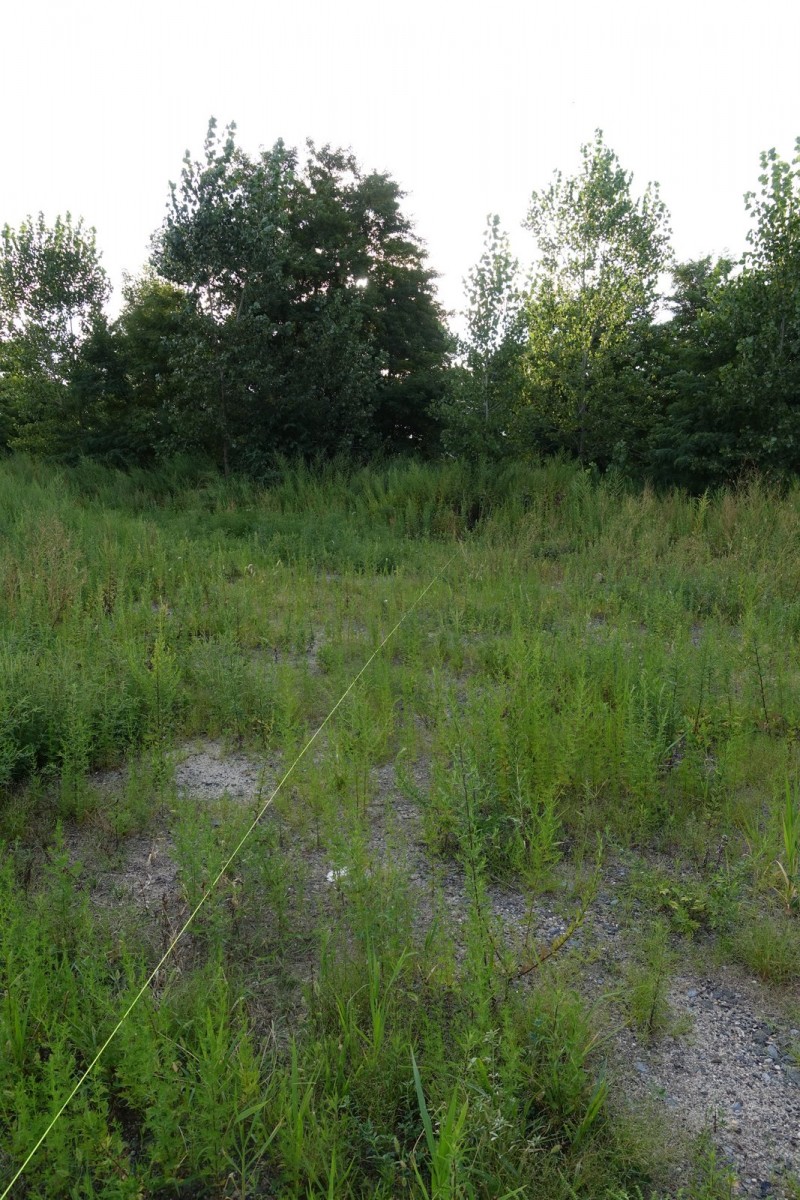 A line goes through it: it was unclear if this was ‘art’ done by someone involved with Chance Ecologies or perhaps a territorial boundary line for developers. 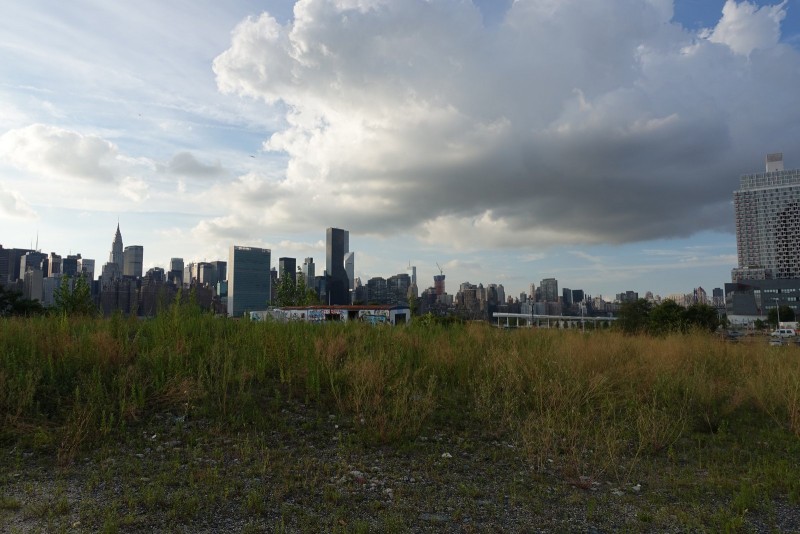 It’s amazing the absolutely drastic dichotomy between the Manhattan skyline and the undeveloped wild terrain of Hunters Point. 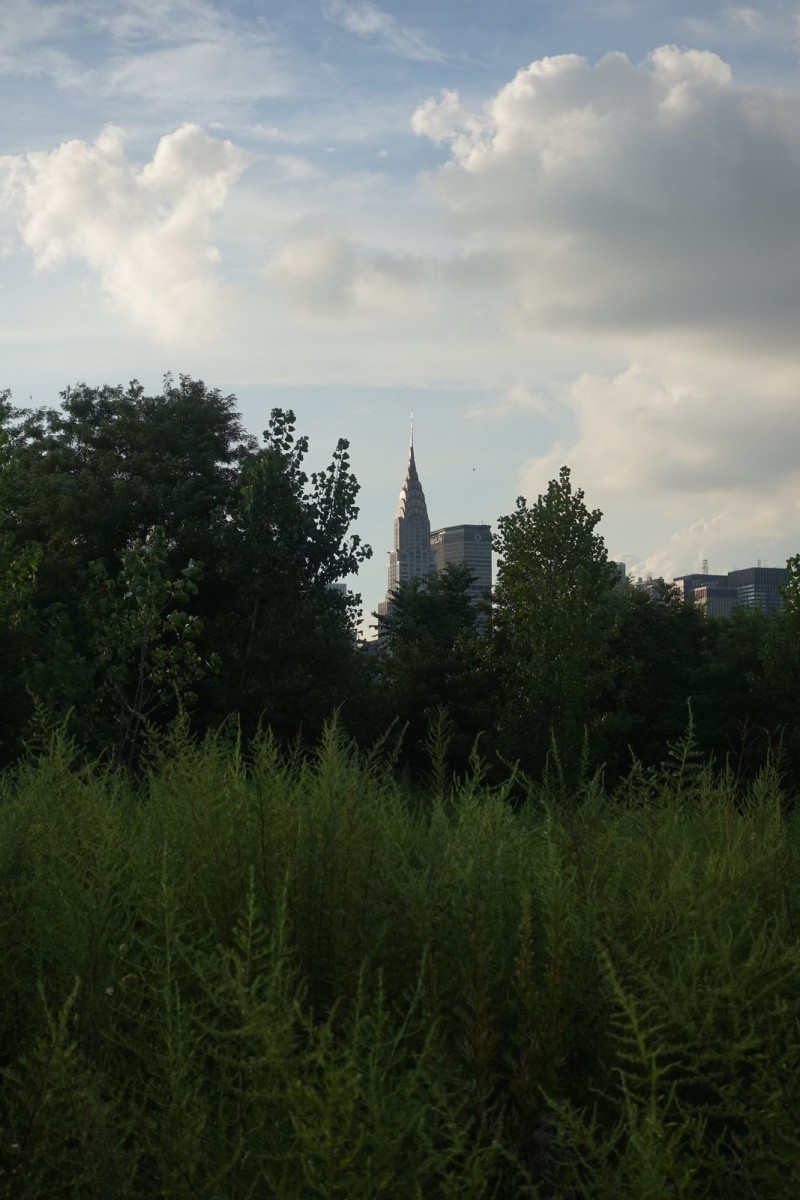 Love this shot of the Chrysler Building peeking through the weeds. 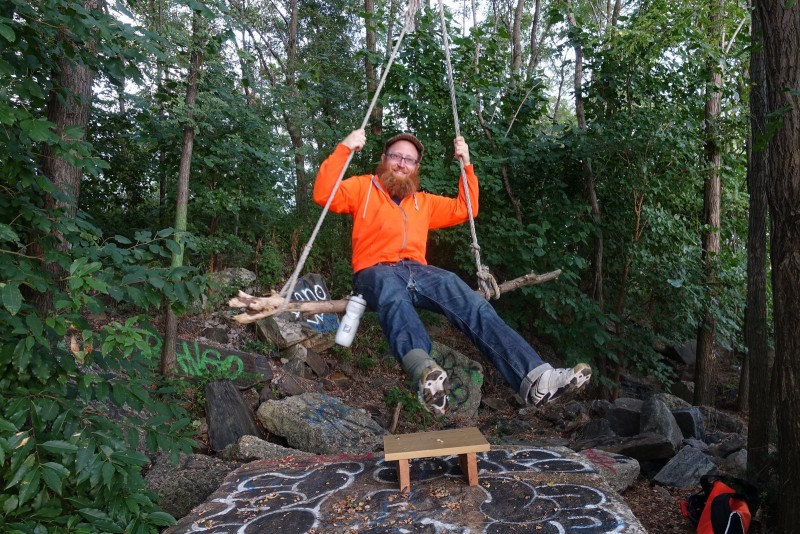 ‘The Swing,’ a location on the map; someone installed this rope-and-branch swing – it has views of the East River and Manhattan. Rad! 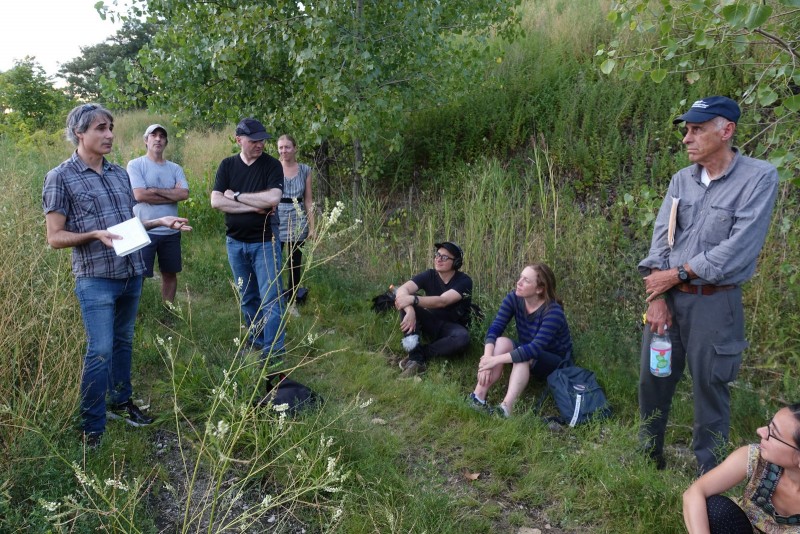 Wrapping up, with a bit of oral history. 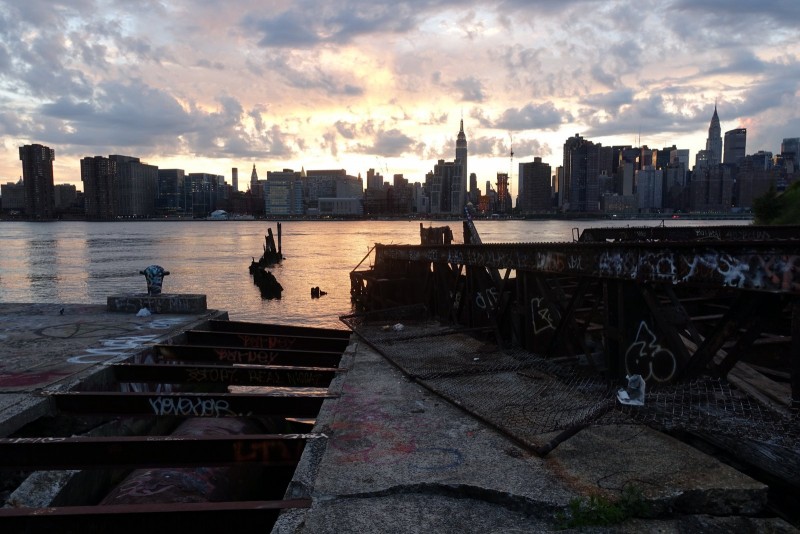 Goodbye Hunters Point – you will be missed.